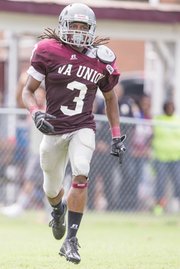 If you’re a CIAA football fan in Virginia, this is as good as it gets: Virginia State at Virginia Union for the Northern Division supremacy.

The winner will go to the CIAA championship game Nov. 8 in Durham, N.C., with a chance to advance to the NCAA Division II playoffs.

Takin’ care of business: In the ninth week of regular season play, VSU cruised past Chowan, 40-7, with freshman Earl Hughes, from L.C. Bird High School in Chesterfield, rushing for 120 yards and two touchdowns.

Breaking the jinx, VUU won at Elizabeth City State, 14-7. It marked the first time since 2005 that the Panthers had gotten the best of ECSU coach Waverly Tillar.

Lennworth Lennon is listed as a wide receiver, but he responded to the opportunity to run the ball with 137 yards and the winning touchdown.

Credit due: Let’s tip our caps to “selection committees” in Ettrick and on Richmond’s Lombardy Street.

The Trojans have won seven straight and are 16-3 overall (13-0 against CIAA schools) in two seasons under coach Latrell Scott. Scott resigned from the University of Richmond in 2011 after a second DWI incident.

There was skepticism when Taylor chose Mark James, who had been part of a failed staff that struggled to the 3-7 mark in 2013.

James, with mostly a high school coaching background, has silenced the critics. His seven victories are the most ever by a first-year VUU coach.

Transfer QBs: Tarian Ayres came to VSU from Virginia Military Institute and has been an ideal successor for former Trojans great Justin Thorpe. Ayres has completed 60.3 percent of passes, has 11 touchdown tosses compared to just three interceptions, and is second in the CIAA with 198.3 yards per game.

Taking over as VUU signal caller is the coach’s son, Dane James, a transfer from Florida A&M, where he was signed by then-Rattlers’ coach Taylor.

No one can accuse coach James of nepotism. Dane James was clearly third team before Oct. 25 injuries to starter Ken Graham and back-up Shawheem Dowdy.

Foot soldiers: A pair of talented kickers could decide Saturday’s showdown between VUU and VSU.

Virginia Union’s Kroy Krepich from Northern Virginia has six fields goals, including blasts from 50 and 55 yards. He averages 42 yards per punt, with nine being downed inside the 20.

History lesson: In a series of matchups that began in Petersburg on Nov. 11, 1900, VSU leads VUU 50-45-9. The Trojans crushed the Panthers, 63-7, last year at Rogers Stadium in Ettrick, but the Panthers prevailed in 2012 at Hovey Field.