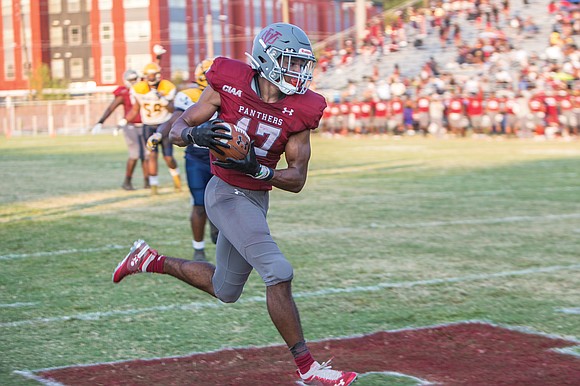 Virginia Union University’s Charles Hall snags a 74-yard pass from quarterback Khalid Morris and takes it in for a touchdown last Saturday in the Panthers’ game against Johnson C. Smith University at Hovey Field. Photo by James Haskins

This year, he has become a leading man.

“Charles waited his turn. Now he’s showing what he can do,” said VUU Coach Alvin Parker.

Hall, who answers to “Chuck,” snared touchdown catches of 74 and 11 yards from Panthers quarterback Khalid Morris. Through three games, Hall has 14 receptions for 398 yards and five touchdowns.

“I feel pretty good” about the season, Hall said. “But I definitely want more. I set new goals each week and push myself to reach them.”

A year ago, Hall caught only two passes and was used primarily on special teams kick coverage. He kept the faith.

“There were a lot of older players ahead of me,” he said. “I knew that if I worked hard I’d play much more this season.”

“Things happen for a reason,” said Hall. “I remember starting to fill out the papers to go to St. Augustine’s. Then I got a call telling me to hold up.”

“We’ve got a lot of contacts in New Jersey,” Coach Parker said. “That’s where Pete Hunter (of Atlantic City) came from and many others.”

Hunter is the last VUU Panther drafted into the NFL in 2002.

Hall starred in football, mostly as a defensive back, and track and field at Delran High School in New Jersey. As a senior, he won the New Jersey state high jump and took second in the long jump.

There is plenty of athleticism in Hall’s family tree. He is the nephew of Trenton native Troy Vincent, who currently is execu- tive vice president of football operations for the NFL.

“He was my mentor,” Hall said of his uncle.

Vincent became a first round NFL draft choice out of the University of Wisconsin and went on to collect 47 career interceptions from 1997 to 2006.

Like Uncle Troy, Hall concentrated on being a defensive back before his conversion to offense at VUU.

Hammond made 10 solo tackles and returned an interception 40 yards for a clinching touchdown.

The Panthers are 2-1 thus far for the season, with wins over Hampton University and Johnson C. Smith, and a loss to Lenoir-Rhyne University.

Winston-Salem State Uni- versity, which VUU will play this weekend at Hovey Field, is 1-2, with losses to University of North Carolina-Pembroke and Catawba College and a victory last Saturday over Tuskegee University.

The matchup with Winston- Salem State will be VUU’s first CIAA game. The contest with Johnson C. Smith did not count in the CIAA standings.