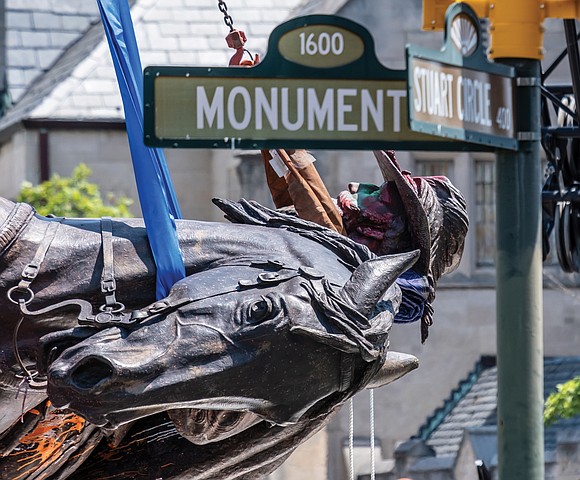 To donate or not to donate?

That is the question Richmond City Council may face when it comes to disposing of most of the city-owned Confederate statues.

“Donation preferred” is a common theme of the 22 bids that the City Council’s staff has received from 17 organizations and five private individuals who have expressed interest in removing and re-establishing them elsewhere, according to a compilation prepared by Lawrence R. Anderson, council’s chief of staff.

No date has been set for a decision on the statues the council controls and for at least three and possibly four others, including the statue of Christopher Columbus from Byrd Park. The Columbus statue’s fate would be subject to a recommendation from Mayor Levar M. Stoney’s administration.

When the time comes, “we will need to make sure we are not sending them to a place where they once again will have a prominent position,” said 9th District Councilman Michael J. Jones, who has been a leader in pushing for removal of the statues. “We didn’t take them down so they could go up elsewhere in a similar place.”

Dr. Jones, who would be just as happy to leave the statues in storage where they are out of sight and mind, said close scrutiny of the proposed relocation sites would be a top priority for him.

He said he agrees with other council members that it would be good if the auction to dispose of the statue could generate money to help defray city spending, including the $1.8 million that Mayor Stoney authorized to remove them.

Protesters pulled down four monuments, including the statues of Jefferson Davis and Columbus and two others, the statue of railroad tycoon and Confederate Gen. Williams Carter Wickham in Monroe Park and the Richmond Howitzers monument in a small park at Harrison Street and Park Avenue. The city administration is working behind the scenes on the fate of those four statues as well.

For now, the council is not applying any pressure to its staff for a quick decision on the statues it controls.

Mr. Anderson said the bids are still being reviewed with the assistance of the city’s procurement department, and he anticipates that any council action on the statues will occur after the new year.

He said he has not presented a recommendation on any of the items; the timing for any action would be up to council, he said. It could happen in January, but it could be February, March or even later, he said.

The council had 10 Confederate items on its list, but only nine are available at this point. One, the statue of Confederate Gen. A.P. Hill at Laburnum Avenue and Hermitage Road, is part of his grave and the council has been advised that a court order would be needed to remove it, although none has been sought.

The bids under consideration include one from a Los Angeles museum that wants them for up to two years for an exhibit, and another from a Connecticut art studio that proposes to break them up and sell the pieces as a fundraiser for Richmond Public Schools and charitable groups in the city.

Other bidders want to place them in battlefields or at historic homes with a connection to the Confederate icons, such as Gen. Stuart.

A few bidders, such as the Virginia and South Carolina divisions of the Sons of Confederate Veterans, the Ratcliffe Foundation in Southwest Virginia and Belmead on the James, the site of a former Black Catholic school, want them all.

Several private individuals are offering space on their property as a relocation site to assist the city.

Other bidders are seeking specific statues.

For example, The Valentine is seeking the Jefferson Davis statue to add to its collection of the works of artist and sculptor Edward Valentine, a member of the family that started the Richmond history museum and whose home remains a centerpiece of the museum property at 10th and Clay streets.