White Lies Matter group threatens to turn stolen $500,000 chair into a ‘toilet’ unless the United Daughters of the Confederacy in Richmond posts banner on anniversary of Confederate surrender 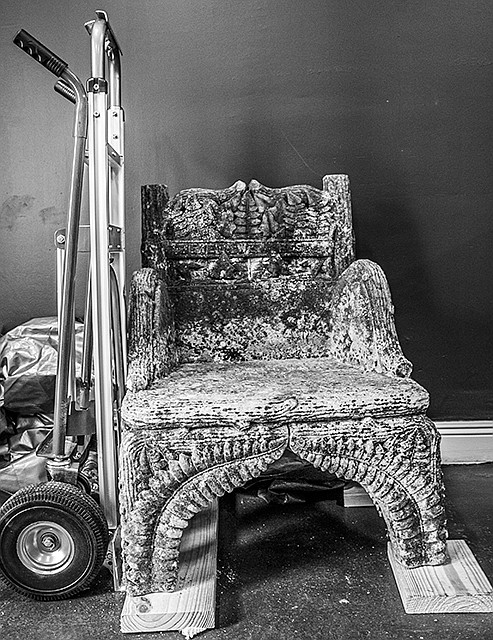 A photo of the stolen Confederate chair and a flyer outlining demands were in a packet emailed to the Richmond Free Press by a group calling itself White Lies Matter.

Editor’s note: A spokesperson from the Richmond FBI office said Thursday evening that the office was advised that New Orleans police have recovered the chair and have a person in custody.

It started with the March theft of an ornate stone chair dedicated to Confederate President Jefferson Davis that has been a fixture for more than a century in a cemetery in Selma, Ala.

Now a group calling itself White Lies Matter is claiming possession of the chair that is valued at $500,000 and has sent a ransom demand to the chair’s owner, the United Daughters of the Confederacy in Richmond.

The demand: Unfurl a banner outside the UDC headquarters building on Arthur Ashe Boulevard that the group has delivered. The banner must be put up on Friday, April 9, the 156th anniversary of the surrender of the Confederate Army at Appomattox. 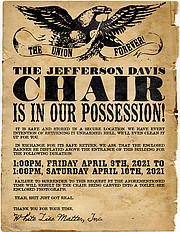 According to the group’s statement that was emailed to the Free Press, the banner features a quote by Assata Shakur: “The rulers of this country have always considered their property more important than our lives.”

Ms. Shakur, a former member of the Black Liberation Army, escaped from a New Jersey correctional facility in 1979 after being convicted for the 1973 murder of a New Jersey state trooper. She reportedly is living in exile in Cuba.

The email states that the banner must go up by 1 p.m. Friday and be visible for 24 hours. The time was chosen because that was when rebel Gen. Robert E. Lee first met Union Gen. Ulysses S. Grant to surrender his 28,000 troops.

White Lies Matter emailed this crafted photo of where they demand the banner should be placed — and what it should say — outside the United Daughters of the Confederacy’s Richmond headquarters on Arthur Ashe Boulevard.

If the UDC refuses to comply, the group wrote that it will bore a hole in the chair’s seat and turn it into a toilet.

If the UDC does display the banner, “not only will we return the chair intact, but we will clean it to boot. For all that talk about heritage, they really haven’t taken care of the thing,” White Lies Matter wrote.

White Lies Matter issued the statement to the Free Press and other media outlets Monday detailing its actions and demands. The initial response on Monday from the UDC: “Fake news.” UDC officials, bombarded with calls from media outlets, have not been available for further comment.

What is not fake, however, is that the chair is gone. The Selma Police Department confirmed Monday that the chair disappeared from the cemetery between midnight and 3 a.m. March 19.

The Dallas County, Ala., District Attorney Michael W. Jackson, who is Black, was unaware of the theft until the media began calling. “This incident is sending Selma back into ‘The Twilight Zone,’ ” he said.

He said he learned from police that a $5,000 reward has been posted for information leading to recovery of the chair, which was placed in Selma’s Live Oak Cemetery in 1893 by a group known then as the Ladies of Selma and subsequently given to the UDC.

Among those interred in the cemetery are Edmund Pettus, a Confederate general, former U.S. senator and leader in the Alabama Ku Klux Klan, whose namesake bridge a few miles away became a key battleground in the 1965 march for Black voting rights. The march became known as “Bloody Sunday” because of police violence against peaceful protesters, including the former Georgia Congressman John Lewis, who was 25 at the time.

Jefferson Davis is not buried in Live Oak Cemetery. A leading white supremacist in his day, he is buried in Hollywood Cemetery in Richmond, the former capital of the Confederacy.

It is unclear who or how many people comprise White Lies Matter. The group only lists an email address. It is not even certain the felony theft was carried by members of such a group as the Selma police have no suspects.

This is the second theft of a Confederate relic from the Selma cemetery. In 2012, a bronze bust of Confederate Gen. Nathan Bedford Forrest was stolen from the cemetery. It was never recovered. The UDC has replaced it.

In the email statement, White Lies Matter wrote that “Jefferson Davis does not need (the chair) anymore. He’s long dead. To be honest, he never even had the chance to sit in it in the first place.

“Like most Confederate monuments, it mostly exists to remind those whose freedom had to be purchased in blood that there still exists a portion of our country that is more than willing to continue to spill blood to avoid paying that debt down,” the statement continued.

“We took their toy, and we don’t feel guilty about it. They never play with it anyway. They just want it there to remind us what they’ve done, what they are still willing to do.

“But the South won’t rise again. Not as the Confederacy. Because that coalition left out a large portion of its population.

“All that’s left of that nightmare is an obscenely heavy chair that’s a throne for a ghost whose greatest accomplishment was treason.”