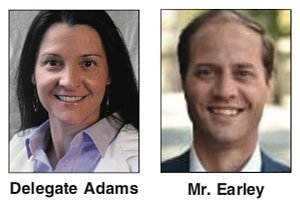 Delegate Dawn M. Adams, who was first elected to represent House District 68 in 2017, has a tough challenger in Republican Mark Earley Jr.

She is the first Democrat in three decades elected to represent the district, which stretches from Richmond’s Museum District to the West End and south to the Willow Oaks area, west and south to parts of Henrico and Chesterfield counties.

Delegate Adams has outlined priorities that include raising teacher pay in Virginia above the national average; expanding pre-kindergarten for 3- and 4-year-olds; investing in wider broadband access to close the digital divide; promoting career readiness by building internships and apprenticeships into school curricula; combating maternal mortality rates among Black women; increasing funding for mental health and sub- stance use disorder treatment; and raising the minimum wage to $15 by 2024.

As a foster parent, Mr. Earley wants to reform the foster care system by ending the aging out of youths from help and providing more sup- port between adoptive and biological families so children will have stable homes.

Campaign fundraising data on the Virginia Public Access website shows that as of Sept. 30, Delegates Adams has raised $492,348, while Mr. Earley has raised $283,240.