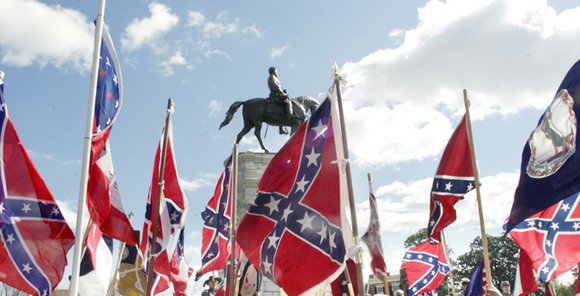 This photo was taken on Feb. 25, 2012, during a Sons of Confederate Veterans rally on Monument Avenue in Richmond. Photo by Jerome Reid

The executive director of the Historic Richmond Foundation is defending the organization’s decision to rent the historic church it owns and maintains in Downtown to a Richmond-based national group that glorifies the Confederacy.

The nonprofit foundation, whose mission is to preserve, promote and protect historic places for the economic benefit and cultural enrichment of Richmond, is renting Monumental Church to the United Daughters of the Confederacy for the group’s annual memorial service for members who have died during the past year.

The UDC was founded in 1894 by female descendants of Confederate veterans and purports to honor their memory and heritage. Others see them as a not-so-well masked purveyors of hate.

“Though they are genteel and have good middle class decorum, the United Daughters of the Confederacy advocate white racist history,” said Edward H. Sebesta of Luzerne, Pa., who has worked to stop churches in Richmond and around the country from hosting the Confederate group.

Mr. Sebesta’s research has been published in peer-reviewed academic journals and university presses on neo-Confederate groups since 1998.

He told the Free Press the memorial service may sound innocent enough, but “it lends the prestige of the (church) institution to the United Daughters of the Confederacy. You wouldn’t let the Ku Klux Klan rent that space.

The UDC memorial service is scheduled to start 1 p.m. Sunday, Nov. 9, at the church at 1224 E. Broad St. in Downtown. The service is a part of the UDC’s national convention scheduled for Thursday, Nov. 6, through Monday, Nov. 10, at the Omni Richmond Hotel in Downtown.

UDC officials did not respond to several Free Press requests for comment on the memorial service. According to the Confederate group’s website, flowers used for the service “should be placed later on a monument or marker dedicated to the Confederate dead.”

Mary Jane Hogue, the Historic Richmond Foundation’s executive director, told the Free Press her group has a welcome sign on the church door to all groups that want to rent the space.

“The building (church) is a national treasure. It’s open to everyone,” she said. “We rent it for any kind of public function.”

Monumental Church is vacant except when events are held there. It was built in 1814 to memorialize the 72 people, including Virginia Gov. George W. Smith, who died when the Richmond Theater burned at the site in 1811. It first served as an Episcopal Church until 1865 and later as a chapel for the adjacent Medical College of Virginia.

Ms. Hogue was asked why the foundation would rent the church to a group that celebrates the Confederacy, which fought to maintain the enslavement of millions of people of African descent.

Mr. Sebesta said groups such as the UDC portray themselves as mainstream while disguising their hateful intent.