Gugu Mbatha-Raw brings depth to ‘Beyond The Lights’ 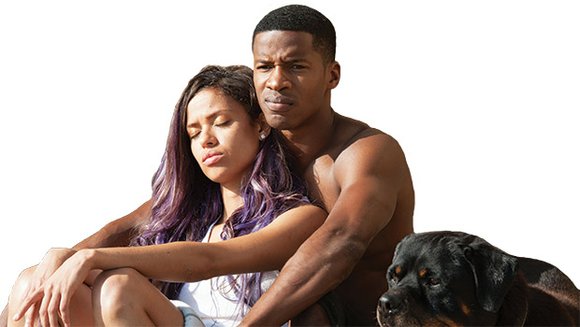 Honored this past October with the “Emerging Icon” award from Elle Magazine at the celebration for their 21st annual “Women in Hollywood” issue, Gugu Mbatha-Raw is an actress on the rise.

Earlier this year, she starred in the breakout role of Dido Elizabeth Belle in the title role along-side Tom Wilkinson, Emily Mortimer and Miranda Richardson. Her next starring role is in the contemporary love story Beyond The Lights, which opens in theaters on Friday.

In the cautionary tale, Mbatha-Raw stars as British pop star Noni Jean who is on the verge of superstardom, but breaks down and falls apart under the glaring lights and pressures of her new-found success.

Written and directed by Gina Prince-Bythewood (Love and Basketball) and set in Los Angeles, Beyond The Lights also stars Nate Parker (Nonstop) as love interest Kaz Nicols, a young police officer who enters Noni’s rarefied world and literally saves her life, and Minnie Driver as her mother and manager Macy Jean who wants to control her life and her rise to pop stardom.

In a recent interview with the Banner, Mbatha-Raw talked about what drew her to the role of Noni.

“You know, I really thought Gina Prince-Bythewood had done an amazing job in illustrating the behind-the-scene elements of the industry; taking the gloss off a glamorous industry,” she said. “We see this woman struggling to find herself and it’s a beautiful love story. I loved the mother-daughter relationship; love that she was a complex character; a child who becomes the breadwinner in the family.”

Mbatha-Raw brings a depth and soulfulness to the role of Noni that may have seemed unlikely in less capable hands. Born in Oxford in the United Kingdom and trained at the Royal Academy of Dramatic Art in London, Mbatha-Raw always loved acting as a child. Her first professional role was as Celia in a production of Shakespeare’s As You Like It, followed by roles at The Royal Exchange Theatre in Manchester, England. There, she performed in Antony and Cleopatra and played Juliet in Romeo and Juliet opposite Andrew Garfield (The Amazing Spider-Man).

In preparation for the character of Noni, Gugu trained for six months with Laurieann Gibson, Lady Gaga’s former choreographer, and also worked with vocal coach Debra Byrd. Of working with the choreographer, the actress said, “Laurienann Gibson put me through my paces.”

Gugu drew inspiration for her character from real-life artists such as Rihanna, Prince, Beyoncé and Katy Perry. The actress was steered by Gina Prince-Bythewood to look at actresses Judy Garland and Marilyn Monroe.

“Gina directed me toward their bios and the sexualized sex symbol persona of Marilyn Monroe and turning on this person that becomes all that people want to see,” said Mbatha-Raw.

Mbatha-Raw became known to American audiences in 2010 when she starred in the J. J. Abrams TV series Undercovers opposite Boris Kodjoe. A year later, she had a supporting role in the romantic comedy film Larry Crowne starring Tom Hanks, and in 2012 appeared opposite Kiefer Sutherland in the Fox television series, Touch.

In the coming months we’ll see more of Mbatha-Raw. She just wrapped the film The Whole Truth with Renée Zellweger and Keanu Reeves which was directed by Courtney Hunt (Frozen River). In 2015, the actress will appear in Jupiter Ascending with Channing Tatum, Mila Kunis and Eddie Redmayne. She’s also set to star opposite Will Smith in an untitled film about Dr. Bennet Omalu, the forensic neuropathologist who first discovered extensive brain damage in NFL players.

Mbatha-Raw describes Noni as going through an evolution.

“She’s quite a damaged soul, and going through an emotional journey was challenging,” she commented.

In the end, the role helped Mbatha-Raw better understand herself.

“I feel like I learned things about myself and life and every project I do,” she said. “The message of the film is to be who you are and stay true to your instincts. I learned that’s something that I aspire to, as well as finding your voice.”

Beyond The Lights opens in theaters nationwide this Friday, Nov. 14.