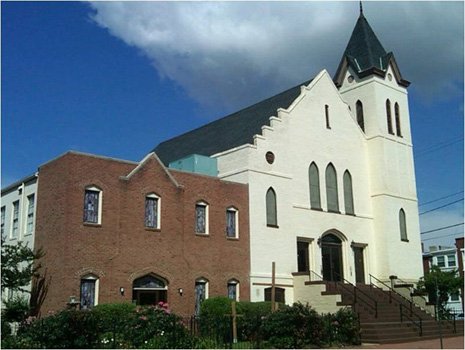 Sharon Baptist Church in Jackson Ward is still on the market, according to a major Richmond real estate company’s website.

“That’s just not so,” the pastor, the Rev. Paul Allen Coles, said of the listing on the website of Cushman & Wakefield/Thalhimer.

Rev. Coles said the nearly 600-member church at 22 E. Leigh St. listed its property with the real estate firm 18 months ago, but he said the church has since ended the relationship with the company.

For the time being, he said, the church is staying put on the corner of 1st and Leigh streets, where the sanctuary has been since 1890.

Officials at the real estate company could not explain why the 127-year-old church is still listed as available on its website, even though its office records show it is unavailable.

In a news article last week, the Free Press included Sharon Baptist among several churches whose properties are on the market, including the former East Pilkington Street home of Second Baptist Church of South Side and the Cowardin Avenue home of the Richmond Christian Center.

The article prompted Rev. Coles to make his first public comment on the status of Sharon Baptist’s property. He made his comments during a call to the Free Press after the Nov. 13-15 edition was published.

Earlier, he and his members stayed mum on whether the church was considering selling its current site and moving elsewhere.

Meanwhile, Second Baptist is still seeking a buyer willing to pay at least $400,000 for its former sanctuary, according to Sperry Van Ness/Motley’s, which is handling the property.

Separately, the Richmond Christian Center’s property is being offered through an auction ordered by the U.S. Bankruptcy Court.

Richmond-based Motley’s Auction is handling the weeklong sale. Bidding is largely going on online and was to culminate Thursday, Nov. 20. The court must approve the winning bid.