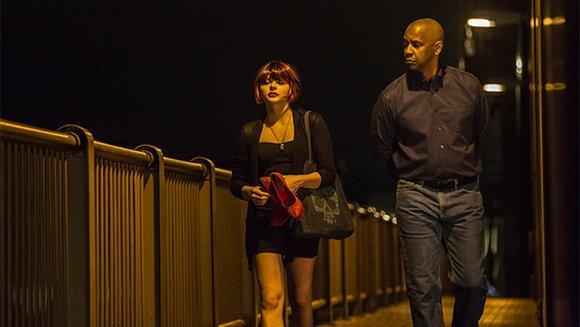 Denzel Washington reteams with his Training Day director Antoine Fuqua in the action thriller, The Equalizer. Based on the 1985 television show starring British actor Edward Woodward as Robert McCall, a middle aged retired intelligence officer with a mysterious past who helps people in trouble, Washington lights up the screen as the modern-day McCall in the film version.

Washington stars as McCall, a store manager working at Home Mart, (a Home Depot-like store), who puts his past as a retired black ops soldier behind him. McCall is now living a simple and quiet life in Boston, albeit with several obsessive-compulsive tendencies. McCall spends his non-working hours reading the great American classics like Moby Dick in the wee hours of the morning at a local coffee shop. 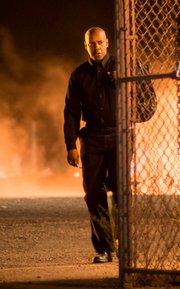 All of that changes when Teri (Chloë Grace Moretz), a young prostitute who McCall has befriended on his nightly visits to the diner, is hospitalized after being brutally beaten by her pimp, Slavi (David Meunier). Strangely protective of her, Robert can’t sit idly by, and doesn’t. He feels a call to action and ends up killing Slavi, unaware Slavi is a member of the Russian mob.

The film sets up the story slowly and steadily, building up to where you feel the tension bubbling below the surface, ready to explode. And explode it does. McCall’s actions set up a chain of events in which there’s no return. He comes out of his self-imposed retirement recharged and finds his desire to exact punishment against anyone who terrorizes the helpless reawakened.

Denzel commands every scene of The Equalizer with his direct and penetrating gaze, cool smile, steady voice and, of course, his signature stride. He’s having fun in the role, and you want McCall to succeed as avenger in righting the wrongs and teaching the bad guys a lesson.

In a cameo role is Melissa Leo as Susan Plummer, McCall’s former boss. Her presence is immediately felt and she easily goes toe-to-toe with Washington in her all-too-brief scene. Plummer’s husband is played by Bill Pullman.

Beautifully shot in Charlestown and Chelsea, the cinematography is colorful, gritty and striking, painting the Boston skyline and the Zakim Bridge in vivid colors and textures.

Washington, who is also one of the producers on The Equalizer, is a movie star in every sense of the word. You can’t take your eyes off of him, and you can’t help but root for McCall. This is Denzel’s movie, and he pulls you in from the very beginning and leaves you wanting more.

Courtesy of The Bay State Banner