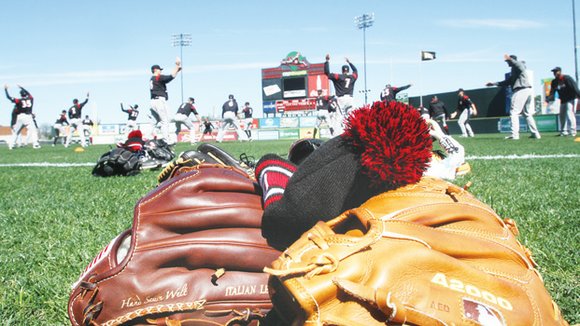 Richmond Flying Squirrels stretch before practice at The Diamond. Photo by Sandra Sellars

He has returned to City Council with his latest proposal regarding a minor league baseball stadium in Richmond.

But surprisingly, the proposal he has presented has nothing to do with building a replacement stadium in Shockoe Bottom for the Richmond Flying Squirrels — a proposal now drawing fire from Hollywood star Lupita Nyong’o, who won an Academy Award for her impassioned acting in the movie “12 Years a Slave. ”

Instead, Mayor Jones’ new proposal is a lease that could keep the Double A affiliate of the San Francisco Giants playing through 2019 at the team’s current home — The Diamond on the Boulevard.

The proposed lease would replace one that the Flying Squirrels signed two years ago with the Richmond Metropolitan Authority, a regional group that has owned The Diamond. The RMA plans to turn over ownership of the stadium to the city at the end of this year.

According to Chris A. Beschler, acting chief administrative officer for Richmond, the city and the team need a lease in place in order to have a smooth transition when the city becomes the stadium’s landlord.

The proposed lease, which is currently on City Council’s meeting agenda for Monday, Oct. 27, provides for the Flying Squirrels to play the 2015 and 2016 seasons at The Diamond.

After that, the team and the city could mutually extend the lease a year at a time for up to three years before a new lease would be required.

If nothing else, the proposed agreement signals that Mayor Jones has given up any realistic hope of having a new stadium in place before his second and final term in office ends Dec. 31, 2016.

As the Free Press reported last week, the mayor appears to be putting more priority in gaining a proposed children’s hospital for the city and less effort in the development plan to move baseball to Shockoe Bottom.

Meanwhile, council members are advising the mayor that before they would consider any revived plan for a stadium in Shockoe Bottom, they would need to see a plan for the redevelopment of the 60-acre Boulevard property where The Diamond and other city operations are located.

“We have told the mayor we are not going to accept one half of the plan,” said one member, who spoke on condition of anonymity. “

That view is now being turned into a resolution calling on the administration to move ahead with a development plan for the Boulevard property. The resolution, spearheaded by Council President Charles R. Samuels, 2nd District, and 1st District Councilman Jonathan T. Baliles, also is scheduled to be voted on Oct. 27.

That resolution requests that Mr. Beschler publicly advertise for proposals for the demolition, development, sale, long-term lease or other disposition of the Boulevard site.

According to the resolution, the purpose would be for the city to hire a developer to prepare a plan to create a mixed-used development aimed at increasing the city’s retail tax base. The resolution also would require that the plan include a replacement stadium for The Diamond.

According to the resolution, the council has provided for the city to spend at least $12 million to relocate existing operations on the Boulevard property and prepare the site for development. The resolution would press the administration to take the next to step to put a plan for Boulevard redevelopment in place for the council to consider.