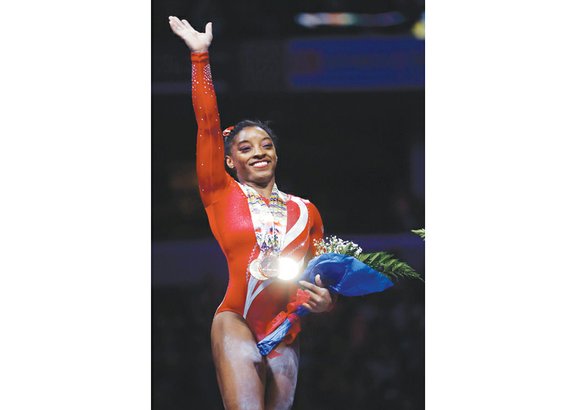 At the moment, there is none.

Biles soared to her third straight U.S. women’s gymnastics title last Saturday, putting on a staggering display that served notice the gap between the 18-year-old and everyone else is widening with the 2016 Olympics less than 12 months away.

Biles posted a two-round total of 124.100, nearly five points ahead of BFF Maggie Nichols in a sport typically decided by fractions.

Biles joined Kim Zmeskal-Burdette as the only Americans to win three consecutive national all-around titles while the two-time world champion extended her unbeaten streak to nine meets and counting.

Biles did it against a group laden with Olympic medals. Three-time Olympic medalist Aly Raisman was third, Bailie Key was fourth and defending Olympic all-around champion Gabby Douglas was fifth in the final major event before the world championship this fall in Scotland. The U.S. will try to back up the team gold it won in China last October.