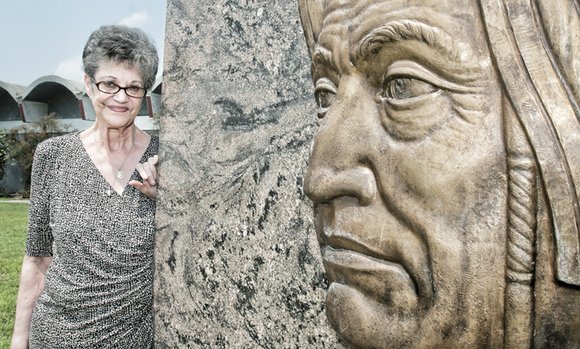 Joyce “Pale Moon” Krigsvold, a volunteer at the Pamunkey Indian Museum and Cultural Center on the reservation and an expert potter, stands near a likeness of the first Pamunkey chief, Powhatan, on the tribal grounds in King William County. Photo by Sandra Sellars

Defeated in battles with the English invaders who took their land, the Pamunkey Indians have been on a reservation and under the thumb of Virginia’s government for more than 350 years — long before there was a state.

Now the dwindling descendants of Pocahontas, Powhatan and other members of the tribe that met the first English settlers to Jamestown in 1607 are one step closer to gaining their independence — and separation from Virginia.

The U.S. Interior Department has announced that the Pamunkey Indians would become the first tribe in the Commonwealth of Virginia to receive official recognition from the federal government.

The recognition allows the 203-member tribe to begin the process of turning its 1,200-acre reservation in King William County into a separate, self-governing entity independent of state control — and opens the possibility the tribe might develop a gambling casino.

The beauty and tranquility of the 1,200-acre Pamunkey reservation is captured on the banks of the Pamunkey River near the Pamunkey Fish Hatchery.

If the Pamunkey tribe ultimately transforms the reservation into a sovereign nation, it would represent the state’s first loss of territory since 50 northwestern counties broke away to form West Virginia during the Civil War.

About 50 tribal members live with their families on the reservation, a mix of farmland, forests and marsh on the banks of the Pamunkey River about 45 miles east of Richmond.

The Pamunkey tribe is one of 11 Native American tribes the Commonwealth of Virginia recognizes. The tribe will gain the coveted federal recognition in 90 days — in early September — opening the door to federal programs. Six other Virginia tribes are seeking federal recognition through legislation in Congress.

“We’re elated,” acting Pamunkey Chief Robert F. Gray said in a telephone interview from his home on the reservation, one of two in the state, the other being for the Mattaponi tribe located near West Point.

“Finally, the federal government has acknowledged we are a historic tribe,” said Chief Gray, ending forever any chance the state could wipe out the tribe’s identity, as it tried to do for decades before World War II.

Joyce “Pale Moon” Krigsvold, an expert potter and volunteer at the Pamunkey Indian Museum and Cultural Center on the reservation, said the tribe likely would hold a celebration of the historic recognition once it becomes official in two months.

The tribe’s efforts to gain federal recognition began 35 years ago and have cost an estimated $2 million.

Repeatedly rebuffed, the tribe filed its latest application in 2012. According to the federal government, the tribe more than made its case that it has been organized since at least 1900 and could prove its existence and the family history of its members with records dating back to colonial times.

Before submitting the latest application, the tribe voted to end a longstanding ban against interracial marriage between tribal members and African-Americans.

Members of the Congressional Black Caucus in January had urged the Interior Department to block recognition of the tribe because of the ban. The department overruled the objection in issuing its final decision.

Former Pamunkey Chief Kevin Brown wrote the CBC that the ban was rooted in Virginia’s culture of racism. “Racial intermixture was raised repeatedly as a rationale to divest us of our reservation and our Indian status,” he wrote.

He recalled Virginia’s efforts to wipe out Indians as a separate group between 1912 and 1946 when Dr. Walter Plecker served as the state registrar of births, marriages and other such records. During that period, Dr. Plecker refused to allow the word Indian to be used, claiming there were none anymore. Instead, he required that Indians be classified as “colored.”

“His rationale was, of course, racial intermixture among the Indians,” Chief Brown wrote, adding that the “antiquated and now repealed” tribal law was “never an attack on or reflective of ill will toward African-Americans.”

Mr. Gray, who took over leadership last week after Chief Brown resigned the post, said it is too early to tell what impact the recognition will have on the tribe, even from the federal programs.

An Air Force veteran and now a civilian manager in the Air Force Reserve, Mr. Gray said the real meaning is that “the government is willing to enter into negotiations and recognize us a sovereign nation” — the status of the 566 other tribes across the nation who have federal recognition.

Once the initial recognition is in place, Mr. Gray said the tribe would be able to apply for federal trust status with the U.S. Bureau of Indian Affairs, a status that would transform the tribe’s 1,200 acres into a fully self-governing entity that could have its own police force and schools and could allow shops that would be exempt from state taxes.

How long BIA approval would take is uncertain, he said. Federal trust status also would allow the tribe to consider new options for the wooded reservation. One option would be to consider building a casino. Currently, 493 casinos exist on tribal lands elsewhere.

“We have discussed a casino, but nothing came of it,” said Mr. Gray, who has served on the seven-member tribal council since 2008. He said the reason is that the land is still under the jurisdiction of the state, which bans casinos.

Whether the tribe would want to develop a casino or shops that would be exempt from state sales and income taxes in the relatively remote, rural reservation is still a question that is unlikely to be settled quickly.

“It’s too soon to say what might happen,” Mr. Gray said. “We just received this notice. We need time to catch our breath before we start having such discussions.”

Currently, the only commercial operations on the reservation are a museum and a fish hatchery that operates one or two months in the spring.

He noted that the tribe is skeptical that the initial federal recognition will result in much federal help. For example, Mr. Gray pointed out that the nearest Indian Health Service outlet is in South Carolina, meaning that the service is unlikely to benefit Pamunkey tribal members.

The tribe also has long relied on King William County for public education for its children. It is unclear that a tribal school set up under federal auspices would be feasible, given the small size of the population.

Nor could Mr. Gray say how much benefit federal housing programs would mean, although such programs might make it easier for the tribe to develop more homes or gain mortgages.

Winning recognition has been far from easy, Mr. Gray said, and would not have been possible without the support of the Native American Rights Fund and lawyers associated with it, most notably Mark C. Tilden, a private attorney who represented the tribe and shepherded the Pamunkey application to the Interior Department.

Mr. Gray said the tribe also was fortunate in having tribal and genealogy records dating back hundreds of years, which few, if any, of the other Virginia tribes have.

Most of the tribes have difficulty documenting their history to the Interior Department’s satisfaction or proving the lineage of members as the result of Dr. Plecker’s decisions, the main reason that so many are seeking to win recognition through a congressional vote.