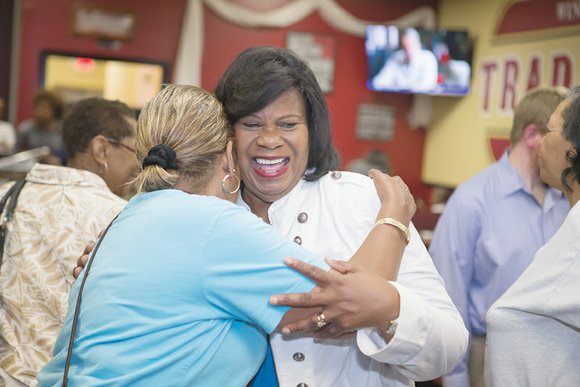 Female political power was on display in Tuesday’s primary elections in the Richmond area.

In separate Democratic and Republican party contests, women repeatedly emerged as the candidates of choice among the voters who went to the polls, leaving male rivals in the dust.

Women already hold three of the five House of Delegate seats representing the city, and the new results appear to continue a trend of change in the area’s once male-dominated political scene.

Nowhere was woman power more evident than in the contested races for party nominations in three area Senate districts. The winners included Democratic Sen. Rosalyn R. Dance in the 16th Senate District that includes part of Richmond, and two Republican newcomers, Amanda Chase in the 11th Senate District in Chesterfield County and Dr. Siobhan Dunnavant in the 12th Senate District in Henrico County.

Currently, only eight of the 40 state Senate members are women, including Sen. Dance. And only one of the eight is a Republican.

Men did win, notably Chesterfield County Supervisor Daniel A. Gecker in the 10th Senate District that includes part of Richmond. Mr. Gecker led in party endorsements and money and captured the three-way Democratic primary with 46 percent of the vote.

He had to overcome a strong challenge from environmental lobbyist Emily C. Francis, who beat Mr. Gecker in the Richmond precincts. She wasn’t able to beat his strong showing in the Chesterfield portion of the district. Former Delegate Alex B. McMurtrie Jr. was a distant third in the race to select a Democrat to run for the seat being vacated by retiring Republican Sen. John C. Watkins.

Incumbent Democratic Delegate Betsy B. Carr crushed her male challenger, businessman Preston T. Brown. She won 80 percent of the vote in her quest for a new term in the 69th House District and is expected to be unopposed in November.

Newcomer Lashrecse D. Aird, a protégé of Sen. Dance and an executive assistant to the president of Richard Bland College, also claimed victory over three men and another woman in the 63rd House District. She won 40 percent of the vote in the contest to choose a replacement for outgoing Delegate Joseph E. Preston, who fell far short in his challenge to Sen. Dance. Ms. Aird will run unopposed in the general election.

In the 74th House District, which includes a bit of the city, the Democratic primary race had only male candidates. There, Henrico County School Board member Lamont Bagby won 80 percent of the vote to win the nomination.

For Sen. Dance, a former state delegate who won a special election last fall that elevated her to the Senate, the primary win was a big boost in her bid for a full four-year term.

Sen. Dance captured 62 percent of the vote and carried all six localities in the district. She will face former Delegate Joseph D. “Joe” Morrissey, who is running as an independent in the November general election.

Delegate Preston, who gave up his seat to challenge Sen. Dance, had the backing of former Sen. Henry L. Marsh III, who had represented the district for nearly 24 years before stepping down last summer to take a seat on the state Alcoholic Beverage Control Board.

Ms. Chase is likely to face Democrat Wayne E. Powell, a lawyer who previously ran against Eric Cantor, in the general election. Mr. Powell filed to run Tuesday, but given the makeup of the district, is considered a long shot to upset a Republican nominee.

Dr. Dunnavant, another anti-abortion, anti-Obamacare conservative like Ms. Chase, won 38 percent of the vote to whip three men, including former Delegate W.R. “Bill” Janis, in seeking to fill the 12th Senate District seat being vacated by aging veteran Sen. Walter A. Stosch, who endorsed her.

Dr. Dunnavant, an OB-GYN, is the favorite to gain the seat in the majority Republican district, but still will have to overcome a challenge from another woman, Democrat and registered nurse Deborah Repp, in the general election.

Mr. Gecker had the endorsement of Gov. Terry McAuliffe and most other elected Democrats at the state and local level for his bid for the Democratic nomination in the 10th Senate District. He now will gear up to face the Republican nominee, Richmond School Board member and lawyer Glen H. Sturtevant Jr., Libertarian candidate Carl R. Loser and independent Marleen K. Durfee, a former Chesterfield County supervisor.

Meanwhile, the Virginia Legislative Black Caucus is going to lose one member, first-term Delegate Michael T. Futrell, D-Prince William. He lost his primary bid to move up to the Senate and will be leaving the House at the end of his term in early January.