Power in the word 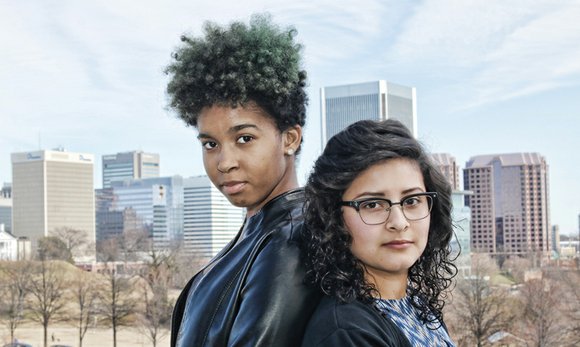 Leslie Reyes, 15, a Huguenot High School student performs an abridged version of "El A Muerto, El Esta Muerto," her spoken word piece about watching one of her best friends die from gang violence. Reyes is one of many young Richmond students who use spoken word to share their pains and frustrations.

Performing spoken word helps 15-year-old Leslie Reyes deal with the gruesome death she witnessed at age 9 of a 16-year-old friend.

With a steady voice, Leslie tells a packed audience of more than 100 people that she watched her best friend die from gunshot wounds in El Salvador. She tells the room of mostly strangers about the “blood-covered gauze and stitched up holes on his shoulder and leg.”

She describes in urban poetry the numbness of her own flesh.

“I never believed I’d see a piece of my life lying on one of the hospital beds, waiting his life away …”

The Huguenot High School sophomore is one of many Richmond teenagers who uses spoken word to share the pain and frustration of life. The freestyle, emotive poetry or prose, performed nightly at venues across the city, allows young people to inject their perspectives on critical social and political issues into local and national discussions.

Leslie, a self-diagnosed spoken word addict, said it’s a relief to be able to share her haunting memories.

Spoken word’s appeal is its accessibility. It requires only a pen and paper — and the courage to get on stage to share your thoughts in word.

“A young black lawyer from Mobile, Alabama, shouldn’t have to re-teach the Constitution to a society who wrote it,” he spat into the microphone, talking about a Civil Rights-era activist who was jailed for his fight for equal justice.

The audience grunted in agreement.

His voice was measured and powerful.

Mysia Perry, 15, an Open High School student performs an abridged version "America," her spoken word story about her fears and anger growing up in a country plagued with racial inequality. Richmondfreepress.com

“Feminism is not telling women to stop being irrational over what could happen, because catcalls are just compliments…”

And 15-year-old Mysia Perry, also an Open High student, performed a letter to America that spelled out her fears of growing up in a country plagued with racial inequality.

Young people like 17-year-old Jer’mon have found their voice and a strong sense of identity through spoken word.

“It’s really like taking my heart and shoving it in the ears of the audience,” Jer’mon told the Free Press. “Our generation is lacking in expressing their intimate feelings about the problems with the nation nowadays.”

Jer’mon said he’s drawn to the style and freedom of spoken word, where there is no standard for chorus, beat or rhyme.

For Leslie, it’s the pauses — or the moments between the words — that give the genre its power. It is even more gripping than music.

“In some songs, while you’re in that pause, people are listening to the music in the background. But when you’re in a pause in spoken word, all they hear is silence and their own thoughts,” Leslie said.

Opportunities to connect with others through spoken word are plentiful around Richmond. Several area restaurants and cafes host weekly, open mic night events.

Slam Richmond is a Saturday poetry competition at artspace, a gallery for visual and performing arts in South Richmond’s Manchester district, that sends local winners to represent Richmond at the National Poetry Slam and Brave New Voices, a youth competition.

Tuesday Verses, an open mic night for music and poetry at Addis Ethiopian restaurant in Shockoe Bottom, was selected as one of the eight most authentic Virginia musical experiences by the blog Virginia is for Lovers.

Leslie was swept into the genre after viewing a video clip online of spoken word artist Neil Hilborn performing a piece called “OCD.” It has more than 9 million views on YouTube.

“I fell in love with it,” Leslie said. “I breathed, ate and slept spoken word. I never thought I had that ability to express in such a powerful way.”

“It’s getting more exposure in different circles. People are starting to see the significance in spoken word,” Mr. West said.

A coach for young spoken word artists, Mr. West said young people and their work are strong, gutsy and honest.

“I remember I used to hide for years behind metaphors. But they’re straight out saying what’s on their mind. It’s so personal. They just put themselves out there the minute they’re on stage,” Mr. West said.

For many performers, opening their hearts on stage is a way to release pent up emotions.

“It’s a sense of relief I guess,” Mysia said offstage. Her recent performance about the black American experience brought the audience to its feet.

“I believe that Harriet Tubman will be disappointed to see us swiftly sliding back down those rails of the Underground Railroad.”