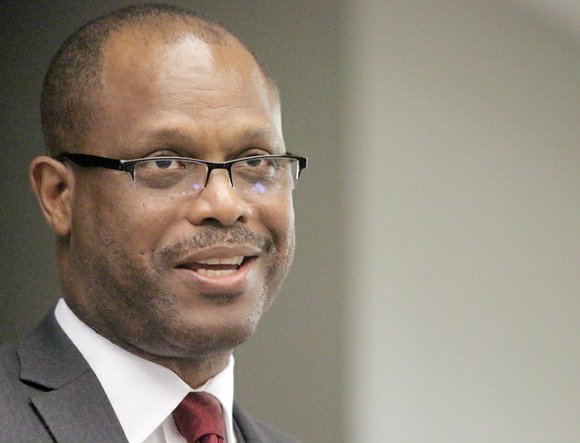 In his first “State of the Schools” address, Richmond Public Schools Superintendent Dana T. Bedden told an audience of about 300 people Tuesday night that education was “my ticket out of poverty.”

“Part of my childhood was spent growing up in the low-income housing of Jordan Park in St. Petersburg, Florida,” he said in an address delivered at the Claude G. Perkins Living and Learning Center on the Virginia Union University campus.

“For 11 of the first 14 years of my life, I slept on a couch in the living room of our one-bedroom apartment. My K through 12 school experience included being part of the desegregation movement and being bused 25 miles to school from the southern part of one city to the northern part of another in Pinellas County.

“Those challenges built character, and education became my ticket out of poverty,” he added. “So I stand before you today with first-hand experience and full of hope that we (RPS and the community) can overcome our challenges.”

He called on Richmond City Council to fully back his administration’s school turnaround plan with adequate funding so students in Richmond’s disadvantaged communities also can escape poverty.

Dr. Bedden has asked City Council to provide an additional $24 million in funding for fiscal year 2015-16 to RPS.

Mayor Dwight C. Jones, who did not attend the speech, has proposed in his 2015-16 budget plan to maintain school funding at its current level of $262 million.

City Council is in the final stages of crafting its budget. Council member Jonathan T. Baliles, 1st District, was the lone council member to attend the speech.

“Poverty is the result of poor education,” he said. “Prosperity is the result of quality education. But schools can’t do it alone. We need support from the entire Richmond community — businesses, families, elected officials and non-profit organizations.”

Backed by a video screen that read, “The Road to Glory,” Dr. Bedden spoke before an audience comprised mostly of parents, teachers and other schools staff. He has been at the RPS helm since January 2014.

He said an increased number of RPS students passed Standards of Learning tests, with greater numbers of students earning Career and Technical Education seals and taking college level courses. But it will take more funding and community support to make greater gains, he said.

Dr. Bedden concluded by saying, “The road to glory will lift our students out of poverty and blends our diversity into a rich melting pot of tolerance, acceptance, teamwork, fortitude, grace and glory.

“We are the architects of this road map, we are the ones responsible for lifting our community into a new era of cooperation so all students graduate, all students find their pathway to success and all students grow into a life of contributing adults, so all of us can be that much better off.

Other speakers at the event included School Board Chairman Donald L. Coleman and Richmond Teacher of the Year Catherine Marchetti from Amelia Street Academy.

Both echoed support for Dr. Bedden’s call for increased funding and community support.

“This evening, it is important for us to choose to be part of the solution,” Mr. Coleman said. “There is an opportunity for greater things to happen.”