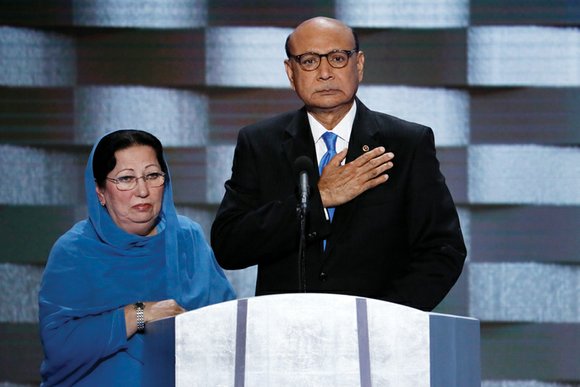 Ghazala, left, and Khizr Khan of Charlottesville appear July 28 on the final day of the Democratic National Convention in Philadelphia to talk about the sacrifice of their son, Army Capt. Humayun Khan, who was killed by a suicide bomber in 2004 during the Iraq War. J. Scott Applewhite/Associated Press

When Donald Trump disparaged the parents of fallen Army Capt. Humayun Khan, he didn’t just pick a fight with the Khans. He now faces the ire of hundreds of Muslim American women.

It started when Mr. Trump, the Republican presidential nominee, responded to the Khans’ appearance July 28 at the Democratic National Convention.

During that appearance, Capt. Khan’s mother, Ghazala Khan of Charlottesville, stood beside her husband, Khizr Khan, silently as he criticized Mr. Trump. Mr. Khan showcased his son’s military service and criticized Mr. Trump’s call for a temporary ban on Muslims from entering the United States, holding up a copy of the U.S. Constitution and suggesting Mr. Trump read it.

He also said Mr. Trump has “sacrificed nothing and no one for this country.”

Since then, Mr. Trump has complained he was “viciously” attacked by the couple, and suggested Mrs. Khan might not have been “allowed to speak,” implying her silence reflected restrictions placed on women by some traditional Muslims.

“If you look at his wife, she was standing there,” said Mr. Trump in an ABC News interview. “She had nothing to say … Maybe she wasn’t allowed to have anything to say. You tell me.”

Mrs. Khan said she declined to speak because she was emotional over the loss of her son, a University of Virginia graduate and decorated Army officer who died in 2004 in Iraq.

“Because without saying a thing, all the world, all America, felt my pain. I am a Gold Star mother. Whoever saw me felt me in their heart,” Mrs. Khan wrote later in an op-ed published in The Washington Post. “Walking onto the convention stage, with a huge picture of my son behind me, I could hardly control myself. What mother could?”

“I became a journalist to pursue transparency to clarify misrepresentations. Misrepresentations that (you) shamelessly create,” NPR’s Noor Wazwaz told Mr. Trump on Twitter.

“I’m a proud Muslim woman, born and raised in the USA, and I’m using my voice to volunteer and vote for Hillary Clinton. #CanYouHearUsNow?” another woman tweeted.

The Council on American-Islamic Relations has pushed the campaign as well, calling on Muslim women to join the Twitter storm by “sharing the various ways they speak out every day.”

“As the leader of America’s largest Muslim civil rights organization, I urge Donald Trump to apologize for his shameful remarks disparaging a Muslim Gold Star family and for his repeated use and promotion of anti-Muslim stereotypes,” CAIR board chair Roula Allouch said in a statement.

“Just as Donald Trump must apologize for his un-American remarks, Republican Party leaders must finally repudiate their candidate’s divisive rhetoric.”

Mr. Trump, who previously called for a “total and complete” ban on Muslim immigration to the United States, said he would implement a database to track Muslim Americans and claimed he watched thousands of Muslim Americans celebrating the 9/11 terrorist attacks.

Prominent Muslim American women have joined in the latest effort, as well as the Muslim Public Affairs Council and other groups.

“Donald Trump needs to move his understanding of Islam and Muslims beyond the stereotypes,” said Rabiah Ahmed, MPAC media director. “Our campaign is one way for us to showcase who we are and what we stand for.”

On Monday, Mr. Trump apparently appealed to Republican members of Congress to support him as his attacks on the Khan family drew sharp rebukes from fellow party members, President Obama, other Democrats and Hillary Clinton’s campaign, his Democratic rival for president.

But little help came from the GOP leadership.

U.S. Sen. John McCain, a Republican from Arizona who chairs the Senate Armed Services Committee and ran for president in 2008 on the Republican ticket, issued a lengthy statement sharply criticizing Mr. Trump’s comments.

“While our party has bestowed upon him the nomination, it is not accompanied by unfettered license to defame those who are the best among us,” said Sen. McCain, a prisoner of war for five years during the Vietnam War.

His counterpart on the House Armed Services Committee, Rep. Mac Thornberry of Texas, echoed Sen. McCain, saying in a statement he was “dismayed at the attacks Khizr and Ghazala Khan have endured after they spoke about their son’s service and sacrifice.”

Even the head of the 1.7 million-member Veterans of Foreign Wars said Mr. Trump’s attack on the Khans went too far.

“He keeps on proving it,” President Obama said at a news conference welcoming Singapore’s prime minister. “The notion that he would attack a Gold Star family that had made such extraordinary sacrifices on behalf of our country, the fact that he doesn’t appear to have basic knowledge around critical issues in Europe, the Middle East, in Asia, means that he’s woefully unprepared to do this job.”

The president also denounced Republican leaders who continue to support the controversial real estate magnate, despite their repeated assurances that Mr. Trump’s rhetoric is often inconsistent with the party’s values.

“If you are repeatedly having to say, in very strong terms, that what he has said is unacceptable, why are you still endorsing him?” President Obama asked. “What does it say about your party that this is your standard bearer?”