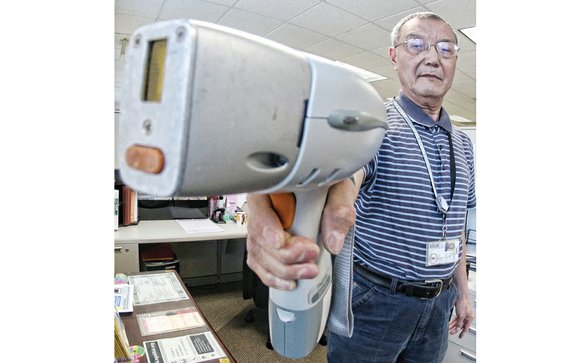 Inspector Ben Yan shows how the lead detector instrument works during a demonstration Wednesday in his office at the Richmond City Health District. Photo by Sandra Sellars

Amid the public outcry over the lead-contaminated public water supply in Flint, Mich., it is easy to forget that lead poisoning remains a threat to children across the country — even in Richmond.

The Centers for Disease Control estimates that 500,000 young children nationally suffer from lead poisoning that can affect development of their mental capacity, their bones and their organs.

In Richmond, 21 children ages 1 to 5 were identified with dangerous levels of lead in their blood in the 2015 fiscal year that ended June 30.

The only good news: It’s the lowest number of city children found to suffer from lead poisoning in the last five years, according to the Richmond City Health District (RCHD).

And the number is far below the 60 to 70 children a year who were diagnosed in the city in previous decades.

Some see the decline as the result of aggressive efforts of the city health district to address the hazard of lead, while others worry that fewer children are being tested.

However, in contrast to Flint, there is no evidence that Richmond children are being poisoned by lead and other heavy metals in the city’s water.

The city Department of Public Utilities has aggressively sought to protect pipes from leeching in compliance with federal guidelines concerning lead and copper levels that went into effect in 1991, according to DPU spokeswoman Angela Fountain.

She said the city’s water supply is monitored and tested to ensure that heavy metals like lead are below EPA danger levels, with sampling conducted both at the water plant and at customer sites.

Every effort is made to ensure city pipes are protected from corrosion, Ms. Fountain said, adding that a new system is being installed this spring to improve that protection.

As a precaution, DPU conducts water sampling in homes when requested or after being notified that a child has been diagnosed with lead poisoning. Of 24 such tests conducted in the past four years, Ms. Fountain said, none turned up dangerous lead levels.

According to Ms. Huang, old peeling lead paint in homes is the main threat in Richmond, along with dirt in yards that is contaminated with dust containing the metal, she said.

Ms. Huang noted that 83 percent of Richmond’s housing units were built before 1978, the year when lead paint was finally banned. Many of those units still have the old paint that by now may be peeling or generating dangerous dust because the lead paint has not been removed or encapsulated with a safer covering.

In some neighborhoods, she said, yards and playgrounds remain contaminated with lead dust from long-closed battery plants and other factories that used the metal or from lead additives once used in gasoline.

Just a tiny amount of lead, Ms. Huang said, can affect the brain, organ and bone development of young children. Lead levels in blood are measured in micrograms. Though no level is safe, the CDC raises concern at levels above 5 micrograms, an amount so small it takes a high-powered microscope to see it.

To help people understand, Ms. Huang said, “Imagine spreading a packet of sugar evenly over a football field and then testing a square foot of that field for sugar particles. And that’s why parents can miss the problem.”

Ms. Huang said she and her staff seek to educate tenants and landlords about the potential risks of lead poisoning, including holding seminars for first-time public housing tenants.

She said RCHD also works with 51 area pediatric practices that serve most of Richmond’s children to encourage testing of young children for lead. State law and regulations strongly encourage medical providers to test children for lead levels and to report elevated levels of lead to state health officials.

Tests are encouraged at least once a year in the first two years of life, and more frequently when elevated lead levels are detected. However, advocates are disappointed that lead testing has yet to be made mandatory like immunizations from measles and other diseases.

Ms. Huang said her staff seeks to make cursory inspections and offer guidance to families when children are found to have 5 to 9 micrograms of lead in the blood.

RCHD also pursues landlords and homeowners to get lead paint or other lead sources removed or remediated if a child is discovered to have blood lead levels of 10 micrograms or more. If a home is found to pose an imminent public health threat because of a lead hazard, then the Richmond City Health District has the authority to condemn the property.

RCHD also is working with the city building inspector to ensure that contractors renovating buildings understand and follow federal renovation, repair and painting rules when dealing with lead-based paint or other materials, she said.

Ms. Huang said that RCHD has three full-time employees assigned to the lead program, but has been able to do more because the Centers for Disease Control provides three additional people to work with the Lead Safe & Healthy Homes Initiative.

But the effort is insufficient, said Richmonder Zakia Shabazz, a family advocate who founded United Parents Against Lead after her son was found to have lead poisoning in the early 1990s. She has led the group for 20 years.

“There’s a lot of inaction in my viewpoint,” said Ms. Shabazz. “The Health District is still using children as lead detectors. They won’t inspect until a child is found to have elevated lead levels. They are not doing enough to be proactive. There is no reason they have to wait to do inspections until a child is poisoned.”

She also is disappointed at the city’s failure to go after federal grants to beef up its lead program and gain funding to remediate lead paint.

Families often are trapped in homes where their children are exposed to lead hazards because they cannot afford to move, she said.

Her group used to offer a lead-free apartment where families could live temporarily until they could relocate, but it had to end the program.

“This is really needed,” Ms. Shabazz said, and it’s evidence that the problem is downplayed.

Her hope is that the crisis in Flint will raise awareness and show the “need to get serious about eradicating the hazard of lead in our lifetime.”