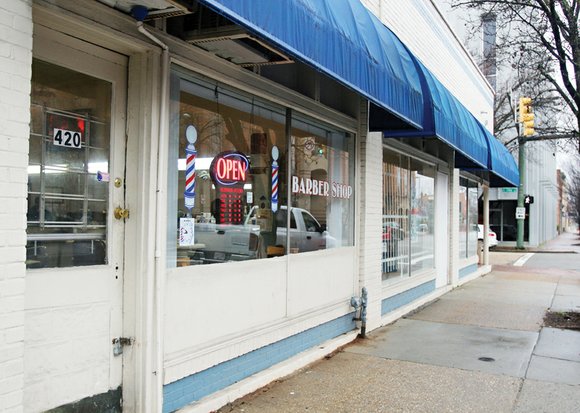 Mr. Lomax’s longtime barbershop at 420 N. 2nd Street that he is leaving behind. Photo by Sandra Sellars

Now 85, he’s leaving. He has given up his shop at 420 N. 2nd St. and is heading to South Side to launch a new barbering operation.

William and Ora Lomax, relax at home as they prepare to launch a combination barber-beauty shop on South Side.

He and his wife, Ora Lomax, who previously owned a beauty shop next door to the barbershop, have been invited by a friend, Pastor Mario Beckles, to run a combination barber and hair salon operation at 3093 Hull St. The space is in the same block as the church that Pastor Beckles founded and leads, Pan De Vida Minestrerio (Bread of Life Ministries).

Pastor Beckles said he wants the Lomaxes to operate in the renovated space as part of improvements to the area the church is spearheading. The shop already is outfitted, the pastor said, but needs experienced hands to get the envisioned operation off the ground.

The Lomaxes will bring other connections. Both are known for their work with the Richmond Branch NAACP, particularly Mrs. Lomax, who served more than three decades as adviser to the branch’s youth programs.

“It was time to move on,” Mr. Lomax said. “Many of my regular customers on 2nd Street have passed away or are in nursing homes so I didn’t have as many people coming in.”

Mr. Lomax said he learned his trade at Maggie L. Walker High School. After graduation in 1949, he started working at Scotty’s Barber Shop near the Hippodrome Theater. The barbershop was among the buildings that later were torn down to make room for the four-story Jackson Center office building.

Except for the two years he served in the Army in the 1950s, Mr. Lomax has been barbering in the Jackson Ward community. He took over Scotty’s after the deaths of the original owner, Robert Scott, Mr. Scott’s wife and Mr. Scott’s barber son-in-law.

When Jackson Center came along, Mr. Lomax took a chair in Walter Gay’s shop at 420 N. 2nd St. and then took over the operation about 15 years ago following Mr. Gay’s death.

He has sold the shop to another barber.

“Times change, and I have to change with them,” he said.