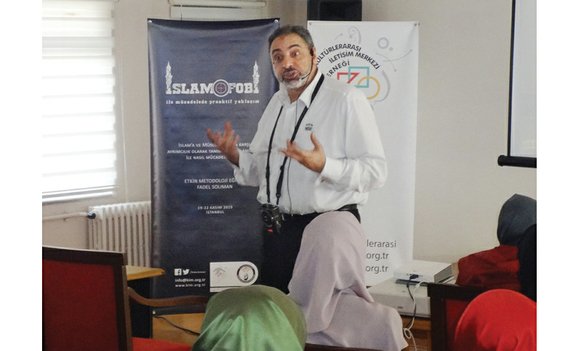 Fadel Solimon conducts a workshop with students in Istanbul. Photo courtesy of Center for Cross-Cultural Communication

In the bustling conservative Fatih district, Imam Fadel Solimon looks at the floor and nods as a young woman asks him for advice on how to respond to criticism of Islam on Twitter.

“Ever since these Paris attacks, people have been tweeting at me with all these verses in the Quran saying to conquer land, expand borders, force everyone to convert or pay the jizya,” she said, referring to a tax levied on non-Muslims.

“But the verses are there,” continued the woman. “They are in the Quran. Didn’t empires like the Ottoman Empire spread like that?”

Imam Solimon then returned to the verses under examination in the Quran and offered his own view. “The Quran simply says if a neighboring country violates a peace agreement, or they attack you, you can defend yourself. … It does not teach you to conquer for wealth, but to remove oppression, to defend the weak.”

A former imam at American University in Washington, the now London-based teacher has spent more than a decade training Muslims on interfaith outreach. He is a member of the International Union of Muslim Scholars, rubbed elbows with the Egyptian Muslim Brotherhood and spent time advising the group’s members during the short-lived government of Mohammed Morsi.

Imam Solimon is among a growing number of Muslim preachers seeking to change the understanding of Islam and modernity. While much of this internal dialogue is taking place in conferences in Western countries, Imam Solimon is one of a handful of preachers targeting the rank and file, reaching more than 19,000 students seeking the tools to counter Muslim critics, and in the process, relearning the traditional precepts of their faith.

Like other reformers, Imam Solimon’s views draw criticism not only from those outside the faith who say he does not go far enough in denouncing some Islamic teachings, but also from Muslims who find it difficult to reconcile his pragmatic interpretations with what they consider traditional teachings.

The workshop in Istanbul was organized by the Turkey-based Center for Cross-Cultural Communication, a nonprofit that reaches out to the 30 million tourists that visit the country annually. The woman who questioned Imam Solimon is one of scores of volunteers being trained on how to respond to questions tourists ask at Istanbul’s most famous landmarks, such as the ancient Suleymaniye Mosque. The workshop is supported by Turkey’s Department of Religious Affairs.

With their long history with secularism, and recent rekindling of interest with Islam, Muslims in Turkey are at a rare juncture for reassessing Islam, Imam Solimon said.

But challenging widespread narratives among Muslims is not an easy task.

For example, the idea that the Prophet Muhammad and his followers saw it as their duty to conquer lands, with the eventual aim of converting everyone, is found in textbooks in many majority-Muslim countries, including Pakistan and Saudi Arabia. It is a narrative that makes it difficult for Muslims to argue against movements such as the Islamic State, which aims to pick up where the Ottoman Empire left off a century ago.