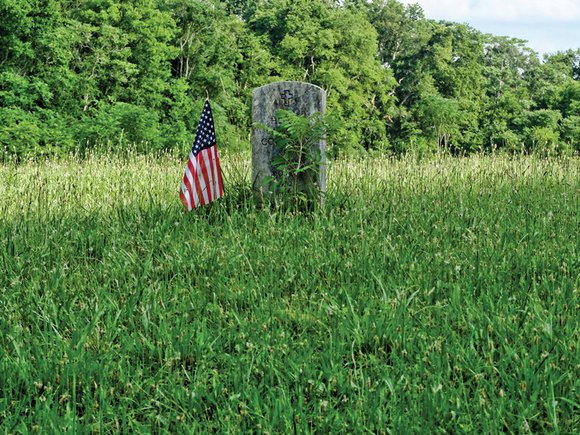 A flag marks a veteran’s grave in private Evergreen Cemetery, located off Nine Mile Road in Eastern Henrico County. The Virginia Outdoors Foundation has launched an effort to preserve and protect the cemetery that dates to 1891. Photo by Sandra Sellars

Volunteers working to restore two overgrown andneglectedAfrican-Americancemeterieson the border between Richmond and Henrico County are getting significant state support.

Last Thursday, as anticipated, the board of the Virginia Outdoors Foundation (VOF) unanimously approved setting aside $400,000 to pay for untangling the title of the private cemeteries and creating a conservation ease- ment to protect the area where more than 10,000 African-Americans have been laid to rest, including pioneering banker Maggie L. Walker, crusading journalist John R. Mitchell Jr. and educator and minister J. Andrew Bowler.

The foundation’s focus is on conserv- ing and restoring the private East End and Evergreen cemeteries that encompass 76 acres. The foundation’s plan is to team up with the City of Richmond’s charity arm, Enrichmond Foundation, and other partners.

Created in 1897, East End Cemetery has long been considered abandoned, according to Henrico County records. Evergreen, which dates to 1891 and includes the graves of Mrs. Walker and Mr. Mitchell, is partly untended and partly still an active cemetery.

So far, Richmond City Hall has yet to include in the preservation effort its two cemeteries, the Oakwood Colored and the Colored Paupers, which adjoin the pri- vate cemeteries and are equally neglected.

Gov. Terry McAuliffe went to the East End Cemetery on Wednesday afternoon to call attention to the action of the founda- tion that was established 50 years ago to protect natural, historic and scenic areas.

U.S. Sen. Tim Kaine, a former governor and a Democratic vice presidential prospect, applauded the foundation’s intervention in a statement, calling the funding “vital support” for the volunteers who have “diligently worked to clear these cemeteries of brush, ivy vines, trees, weeds and years of accumulated, illegally dumped trash.”

The two are the first cemeteries to attract the foundation’s notice.

The graveyards became overgrown be- cause families who originally bought plots did not have to include money for perpetual care, now a requirement for newer cem- eteries. As time passed, families either died out or lost interest in caring for the graves.

Brent Glymph, VOF’s executive director who pushed the effort to use the foundation’s

resources to rescue the cemeteries, called it a moral imperative to save such historical sites. The state foundation’s involvement repre- sentsaboostforpeoplelikeJohnShuck,anIowa transplant who has spent the past eight years mustering volunteers and hacking away at the vegetation that has engulfed the two graveyards. It’s also a boost for Marvin Harris, who is leading an effort by the Maggie Walker Class of 1967 to clean up the cemeteries before the class marks its 50th reunion next year. Mr. Harris has been recruiting volunteers and partners from area landscaping and construction firms that have the equipment and know-how with herbicides to make the project progress

“It’s going to be easier to approach people

about pitching in with this kind of support,” he said.

Mr. Shuck said that volunteers are still needed to keep down the vegetation. Boy Scouts, Girls Scouts and a host of other groups have helped, but every year he has to find ad- ditional volunteers.

Even with all the efforts, less than 10 percent of the overgrown section of the cemeteries has been cleared, Mr. Harris said. “We have a ways to go.”