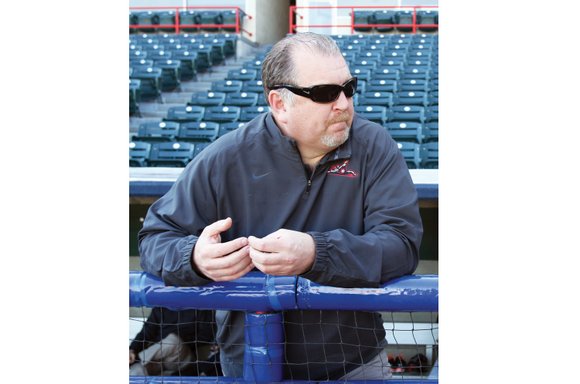 Richmond Flying Squirrels COO and Vice President Todd “Parney” Parnell says, “We work very hard in the front office to make the fan experience and player experience the best it can be” at The Diamond. Sandra Sellars/Richmond Free Press

As the Richmond Flying Squirrels leave spring training in Scottsdale, Ariz., later this week and fly to Richmond on Sunday to prepare for their new Eastern League baseball season, their roster will include two players who are former first round draft picks, a third flame-throwing closer who consistently throws 100 mph fastballs and a new manager who spent the past three seasons at the helm of the Diablos Rojos in the Mexican League, leading the team to the 2014 league championship.

They will be among the people to watch when the Flying Squirrels open their season at The Diamond 1:05 p.m. Thursday, April 7, against the Hartford Yard Goats.

“There’s always the energy and enthusiasm that being undefeated and in first place at this time of the year generates for the fans,” Todd “Parney” Parnell, the Squirrels COO and vice president, told the Free Press on Tuesday.

“We believe we are putting a first-rate team on the field that the fans will be proud of.”

The Flying Squirrels missed the playoffs by one game last season after finishing with a record of 72-68.

The team will appear together for the first time this season 3 p.m. Monday, April 4, in a free, open-to-the-public Media Day event at The Diamond, 3001 N. Boulevard.

Top players to watch this season include shortstop Christian Arroyo, who was drafted in the first round in 2013 by the Squirrels’ parent organization, the San Francisco Giants, and is considered a top prospect. He hit .304 with 28 doubles in 90 games last year with the Class A San Jose Giants.

Another first round pick, pitcher Tyler Beede, was taken in the first round in 2014. He came to the Flying Squirrels in the second half of last season and notched a disappointing 3-8 record, with a 5.23 earned-run average.

Another player sure to catch the fans’ attention is closer Ray Black, who struck out 51 batters in 25 innings last year in San Jose.

Fulfilling their mission as a developmental team for San Francisco since coming to Richmond in 2010, the team has produced 34 players that have gone on to play for San Francisco, which has won three of the past six World Series.

The Flying Squirrels are scheduled to play their first road games Monday, April 11, through Wednesday, April 13, at the Reading (Pa.) Phillies. The Squirrels return to Richmond to celebrate Opening Night 6:35 p.m. Thursday, April 14, against the Altoona (Pa.) Curve.

NFL Hall of Famer and former Pittsburgh Steelers star running back Jerome Bettis, aka “The Bus,” will toss out the first pitch at the game. Gov. Terry McAuliffe also will be there to celebrate Opening Night, where the Flying Squirrels plan to reveal the fan-chosen name for their new female mascot that will join fan favorite Nutzy the Squirrel. A fireworks show will follow the game.