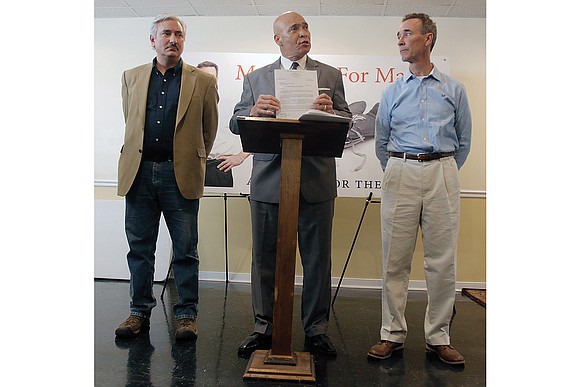 The Richmond mayor’s race has been turned topsy-turvy as the days count down to Election Day next Tuesday, Nov. 8.

As the apparent front-runner, Joe Morrissey, scrambles to contain a new sex scandal with fierce denials, one of his six rivals, City Councilman Jonathan T. Baliles, announced Wednesday he has ended his bid for the city’s top post.


Trailing far behind in recent polls, Mr. Baliles issued a message to his supporters on his campaign website that he was dropping out.

His purpose: To help prevent the election of Mr. Morrissey, whom Mr. Baliles described as the “controversial and divisive candidate who has received national and international negative attention.”

“I can no longer risk splitting votes with other candidates if it means electing someone who so plainly cares only about himself,” Mr. Baliles wrote.

Despite his decision, Mr. Baliles is likely to receive votes because his name still will be on the ballot. So will the name of Bruce W. Tyler, who dropped out of the race for mayor weeks ago for the same reason.

Mr. Baliles, who was not particularly competitive in majority African-American districts where Mr. Morrissey is considered strongest, argued in his website post that other candidates also need to leave the race.

“The only realistic way our city can ensure that we are moving forward on the morning of Nov. 9 is for other candidates to withdraw and consolidate. Not doing so could result in the outcome so many people fear,” he stated.

However, his last-minute call for others to coalesce around one person is unlikely to be heeded by the remaining trio of significant challengers to Mr. Morrissey. Each is more likely to regard Mr. Baliles’ departure as opportunity time, and a boost for their individual campaigns.

The top three, according to polls, are Jack Berry, the former chief executive of the Downtown booster group Venture Richmond; Levar Stoney, a former Virginia cabinet official and the darling of the Democratic establishment; and City Council President and businesswoman Michelle R. Mosby.

A poll this week indicated that Mr. Berry is leading in four council districts, most notably in the 3rd District, and is building his lead in three majority white districts, the 1st, 2nd and 4th.

To win as mayor, a candidate must receive more votes than anyone else in at least five of the nine City Council districts; otherwise there will be a runoff in December between the two top vote-getters.

According to past polls, Mr. Morrissey has been considered well ahead in at least four majority African-American districts, including the 6th, 7th and 8th, as well as the 9th District that Ms. Mosby represents. He also is considered to have prospects at winning one or both of the most contested districts, the 3rd and the 5th.

One thing is certain: Mr. Morrissey has raised public attention to the Richmond mayor’s race.

Stories have appeared in newspapers from New York to London and Toronto to Berlin about the prospects for election of the over-the-top attorney who made history in 2015, when he commuted from a Henrico County jail cell to serve in the Virginia General Assembly.

The latest twist in the saga of Mr. Morrissey has only added to the notoriety of the politician who has bounced back from being disbarred and from serving jail time for contributing to the delinquency of a minor.

The scandal now engulfing Mr. Morrissey emerged out of his private legal practice, but has raised fresh concerns among voters about his character.

The judge’s rare move — and Ms. Taylor’s plans to investigate the situation — came to public light Friday evening, when a local media outlet published a story online that included claims of the former client, Kanika S. Morris, that Mr. Morrissey made sexual advances and then forced her to accept a plea deal when she rebuffed him, which would be illegal and a violation of legal ethics.

Ms. Morris, who had been charged with a felony for keeping a rental car for four months without paying, has backed her allegations with sexually explicit text messages that Mr. Morrissey has admitted sending her.

In response to the allegations that could cost him his law license again, Mr. Morrissey has called Ms. Morris’ allegation of being propositioned in his office bogus.

A second associate, Paul Galanides, who arranged the plea deal reducing Ms. Morris’ felony charge to a misdemeanor, has called Ms. Morris’ claim to be “100 percent categorically false.” He also has produced documentation to support his assertion that Ms. Morris was fully briefed about the plea deal and accepted it without reservation.

Meanwhile, Mr. Morrissey has retained a lawyer, Arnold Henderson V, who laid out the case that Ms. Morris’ claims are false and called on the local daily newspaper to retract the story and issue an apology.

Whatever the truth, it is likely to come out after the election.

Separately, Mr. Morrissey is facing a complaint that he distributed a false campaign mailer that implied in a sample ballot that he had the endorsement of the Richmond Democratic Committee. However, the committee has endorsed Mr. Stoney for mayor.

The state Democratic Party, the city Democratic Committee and the Stoney campaign announced Wednesday they are filing a complaint with the state Board of Elections and issuing a cease-and-desist letter to Mr. Morrissey.

She said a printer left off a mandatory line that would have stated the Morrissey campaign paid for the mailer. She said the printer also altered a headline on the sample ballot that was supposed to state that Mr. Morrissey had been endorsed by the Progressive Democratic Party, a different group.

“The printer removed the word ‘Progressive,’” she said, without consulting the campaign.