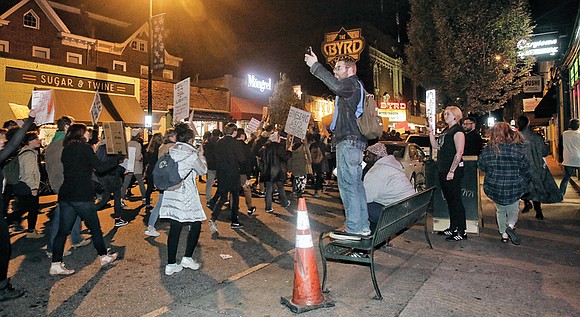 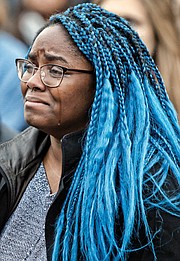 Civil rights and advocacy organizations in Virginia that have spent the last eight years pushing for legal protections under a progressive Obama administration are turning to a new strategy in preparation for a new administration led by a real estate tycoon and reality television star with no political experience.

The NAACP, Planned Parenthood, the American Civil Liberties Union, Equality Virginia and the Sierra Club are localizing their fights, mobilizing protesters and preparing for a defensive campaign for an unpredictable four years.

“The president-elect has a record of saying things he doesn’t mean, but a lot of things can happen based on what he says,” said James Parrish, executive director of Equality Virginia, a statewide advocacy organization for lesbian, gay, bisexual and transgender Virginians.

Mr. Trump’s list of 21 candidates he may review for an appointment to the U.S. Supreme Court features several conservative opponents of marriage equality.

But for state LGBT advocates, said Mr. Parrish, the focus is not explicitly on marriage equality or transgender bathroom laws — both topics visited by the U.S. Supreme Court — but on the easily reversible non-discrimination executive orders signed by President Obama. Among them: Executive Order 13672, which prohibits federal contractors from discriminating on the basis of gender and sexual orientation.

Mr. Parrish also is worried about who will be appointed to replace Loretta Lynch as head of the U.S. Justice Department. He fears it may be someone who won’t “have an interest in hate crimes against LGBTQ people.”

Mr. Ebell, who has fervently denied the existence of climate change, is director of the Center for Energy and Environment at the Competitive Enterprise Institute, a libertarian think tank “dedicated to advancing the principles of limited government.”

“With what we’ve heard this week from President-elect Trump, we are very concerned about the environmental protections that have been gained and we were hoping to make progress on,” said Kate Addleson, director of the Virginia chapter of the Sierra Club.

“We fundamentally don’t believe that a strong economy has to come at the expense of environmental protection,” Ms. Addleson told the Free Press. “All people deserve a healthy environment, a healthy economy and climate.”

But Mr. Trump’s most recent political appointments suggest that progressive interest groups should look forward to toughening up.

Mr. Bannon, 62, was born in Norfolk and grew up in Richmond’s North Side as the middle child of five from an Irish Catholic family.

A1972 Benedictine High School and 1976 Virginia Tech graduate, Mr. Bannon was a parishioner and altar server at St. Paul’s Catholic Church in Ginter Park, where his father still lives.

He has said his alt-right documentary films are “imbued with the conservative populist values I was raised on in Richmond.”

His controversial views have spurred calls from Democrats, some Republicans and conservatives alike, including more than 170 members of Congress, for President-elect Trump to remove him from the important post in the interest of national healing and unity.

There also are reports from the Trump camp of former New York City Mayor Rudy Giuliani, a proponent of the former “stop-and-frisk” policing in New York that largely targeted African-American and Hispanic males, becoming the next U.S. secretary of state.

“The president-elect has not offered any definitive policy statements, but it’s rather telling that his close association with former New York City Mayor Rudy Giuliani does signal that he would be supportive of stop-and-frisk policies nationally,” said Linda Thomas, president of the Virginia State Conference of the NAACP.

Like other state advocacy leaders, Ms. Thomas refuses to take one step backward.

“The best thing any citizen can do, and especially citizens of color, is to stay informed and stay involved. That’s critically important,” she said.

“Now more than ever, it is critical that Virginians stay abreast of legislation in the Virginia General Assembly. It’s vital we stay abreast of local and state law enforcement policies and hiring practices because those are the things that affect our everyday existence.”

Mr. Trump is poised to impact funding of Planned Parenthood, a women’s health organization. His vice president, Indiana Gov. Mike Pence, helped lead the effort to de-fund that state’s Planned Parenthood clinics when he served in the Indiana legislature.

As far as Donald Trump’s stance on women’s health funding, he offered his most definitive, albeit befuddled, response in February during a Republican primary debate:

In an interview broadcast last Sunday on CBS’ “60 Minutes,” President-elect Trump said his nominee to the U.S. Supreme Court definitely will be pro-life.

Asked what would women seeking abortions be left to do if Roe v. Wade, the law legalizing abortion in the United States, is overturned, he said, “Well, perhaps they have to go to another state.”

For Virginia’s abortion and women’s health services advocates, the confusion is a lot more comforting than disheartening.

“It’s critical to look at Trump’s immediate response after the election — that he would be a president for the whole country. And we hope that is not just the case for the alt-right,” said Beth Lynk, Virginia policy press officer for the Planned Parenthood Federation of America.

Nonetheless, like other advocates, Ms. Lynk is mobilizing her “troops” to lobby local politicians, she said. Through mechanisms like volunteering, signing online petitions and sharing personal stories, “we won’t go back,” she said. “We’re investing in our people-power, and waiting to see if Trump is going to live up to his promise to be president for all Americans.”

Last week’s election results also prompted proponents of civil liberties to reach for their wallets. The ACLU, which works through the courts and legislatures to protect the rights of often marginalized Americans, has received 120,000 donations totaling more than $7.2 million since last week, according to the organization’s national website.

That’s “the greatest outpouring of support for the ACLU” in history, said Bill Farrar, director of public policy and communications for the ACLU of Virginia.

The support has the ACLU ready to legally fight against mass deportations of immigrants, stop-and-frisk policing, the de-funding of Planned Parenthood and to help protect transgender rights, he said.

But like most Americans, Mr. Farrar has no idea how President-elect Trump’s policy plans will come to fruition.

“We’re going to see how it plays out. They are alarming,” he said.

“The president-elect has proven not to be a man of his word. So right now, you have to take it all seriously. It’s very worrisome.”