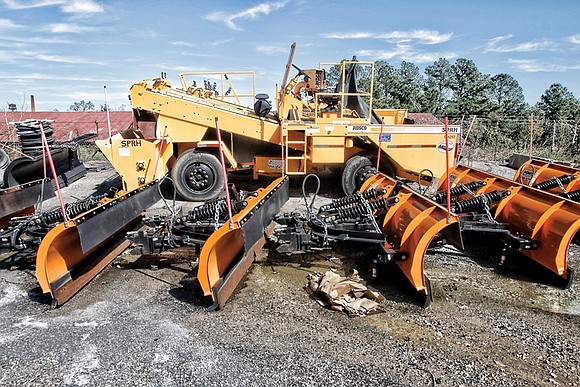 This photo shows a line of snowplows and the large Rosco gravel chip spreader that the Richmond Department of Public Works has left parked for years. Location: The department’s Hopkins Road compound in South Side. Photo by Sandra Sellars

Meanwhile, some vehicles and equipment have developed major rust spots that could reduce their useful life or lead to early breakdowns.

Both appear to be signs of practices that have left department employees concerned that tax dollars are being thrown away by what they see as an uncaring and unthrifty management that has largely frozen their wages for the past five years.

“It’s such a waste,” said one employee, who like others the Free Press interviewed, spoke on the condition of anonymity out of fear of losing their jobs.

For him and others, the wasted machinery also helps explain the sharp drop — from 36 to 12 — in the number of full-time workers assigned to fill potholes, pick up bulk trash and improve alleys.

The Free Press talked with employees and viewed the idle equipment after mayoral candidate Joseph D. “Joe” Morrissey mentioned the situation during an interview with the newspaper’s editorial board last week.

Mr. Morrissey said workers pointed out the equipment when he paid a visit to the compound, along with giving him an earful on the need for change.

How much equipment is going to waste is uncertain.

City Auditor Umesh Dalal said an internal audit of the total inventory and condition of the city’s fleet and related equipment has not been done in some years. The last in-depth audit that can be found was conducted in 2007, although his staff produced a less intense look last year.

However, the examples stick out.

One is a big, brawny Rosco gravel chip spreader that was purchased for $86,596 in 2006 for use in resurfacing streets. At the time, the department was using gravel as part of its resurfacing process.

However, after shifting to another process more than five years ago, the machine simply was parked in the compound and left unused. Two veteran employees said the big machine was left to decay maybe eight years ago, although a department official said it has been sitting no more than six years.

During the Free Press visit this week, the machine was parked behind a storage dome for winter salt and clearly has been in the spot for years.

In response to a Free Press query, Sharon North, a spokeswoman for the Department of Public Works, made it clear the department is fully aware of the situation. She provided details about the machine, including its purchase price and former use.

“The chip seal spreader is valued at $20,000,” she stated, adding that the agency has plans to sell it as surplus and to use the proceeds for the purchase of more equipment.

What remains unexplained is why the department has waited so long to dispose of an unneeded machine.

Ms. North was unable to respond immediately to questions about other unused equipment.

For example, the Rosco machine is lined by seven snowplows that were purchased several years ago. Employees said the plows were put aside when it was found they could not be attached properly to city trucks.

Nearby is another piece of expensive equipment, a Tymco street sweeper, that never gets used. Employees said the machine has been parked for years because it does not do a quality job.

One employee said that street sweeper is a prime example of questionable decision making in the department. He said upper level staff “goes out and buys equipment and never consults the people who are going to use it.”

He pointed to the idle Rosco gravel spreader: “It would be great to use in alleys, but it’s too big. They no longer use it on streets, so here it sits.”

Elsewhere in the city complex was a line of snowplows that employees said are used. Some showed substantial rust.

That was also the case with a grader with a rusted shovel.