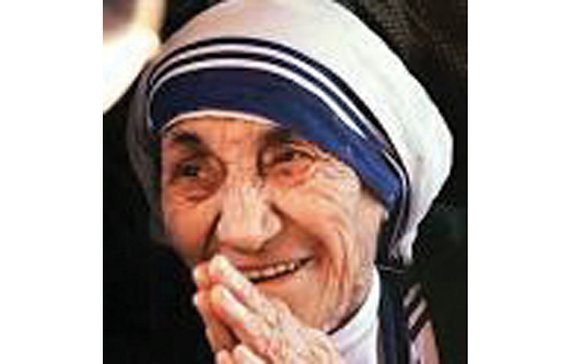 Mother Teresa, the tiny nun who devoted her life to the poor, was declared a saint by Pope Francis at the Vatican as he celebrated her “daring and courage” and described her as a role model for all people during his year of mercy.

At least 120,000 people crowded St. Peter’s Square for the canonization of the acclaimed nun who worked in the slums of Kolkata and was a force to be reckoned with by political and religious leaders around the world.

“Mother Teresa, in all aspects of her life, was a generous dispenser of divine mercy, making herself available for everyone through her welcome and defense of human life, those unborn, and those abandoned and discarded,” the pope said in his homily at the Mass last Sunday morning.

“She bowed down before those who were spent, left to die on the side of the road,” Pope Francis continued, saying her life was an example for other Christians and an indictment of those with influence who could ease the problems of poverty but did not.

“She made her voice heard before the powers of this world so that they might recognize their guilt for the crime of poverty they created.”

The pope then repeated that final line for emphasis: “The crimes of poverty they themselves created.”

Pope Francis gave VIP seats to 1,500 poor people who are supported by the saint’s Missionaries of Charity order across Italy and invited them to a pizza lunch at the Vatican, sending another message about her work — and his own commitment to the poor and vulnerable.

The pope described the new saint as an “eloquent” model for her humble devotion to the poorest of the poor and an “emblematic figure of womanhood.”

Mother Teresa, whose feast day will now be Sept. 5, the date she died in 1997 at age 87, will now be known as St. Teresa of Kolkata — although in an unscripted aside, Pope Francis recognized that many people “may struggle” to remember the new appellation.

“With great spontaneity, I think we will continue to call her Mother Teresa,” the pontiff said.

Considered one of the most influential women in the history of the Roman Catholic Church, St. Teresa was awarded the Nobel Peace Prize in 1979 and was regarded by many Catholics as a “living saint” for her work in the slums of Kolkata, formerly known as Calcutta.

Thirteen official delegations and heads of state, including the prime minister of India, Narendra Modi, attended the canonization Mass amid the tightest security seen at the Vatican since recent terrorist attacks in France and Germany.

President Obama sent a delegation that included the U.S. ambassador to the Holy See, Kenneth Hackett, and two other administration officials, as well as Sister Donna Markham, head of Catholic Charities USA, and Carolyn Woo, head of Catholic Relief Services — respectively the domestic and international relief arms of the Catholic Church in the United States.

The faithful began lining up overnight but crowd numbers appeared to be far lower than the 300,000 who turned out for the nun’s beatification in 2003, possibly because of security fears.

The Rev. Vincent Druding, a priest from Church of the Assumption in Peekskill, N.Y., traveled to the Vatican for the canonization after making a personal pilgrimage to Kolkata to meet the nuns from the Missionaries of Charity, the order she founded.

The saint was born Agnese Gonxha Bojaxhiu of Albanian parents in Skopje in 1910 in what is now Macedonia. She became a nun as a teenager and moved to India in 1929, creating her own order of nuns in 1950.

Under her guidance, the order set up hundreds of shelters for the poor and needy around the world. There are now more than 4,500 nuns as well as priests and brothers from her order working in more than 130 countries, including Yemen, Australia, Venezuela, Guatemala and the United States.

Mother Teresa was credited with two miracles related to healing the ill. One of them, Marcilio Andrino of Brazil, unexpectedly recovered from a severe brain infection in 2008.

He and his wife, Fernanda, were in Rome to attend the canonization, which is considered a highlight of Pope Francis’ Holy Year of Mercy.

Mother Teresa’s worldwide reputation for service and sanctity so impressed St. John Paul II, a friend and pope when she died, that he waived the usual five-year waiting period and opened her cause for sainthood just two years after her death. Pope John Paul then beatified her — the second step toward formal recognition as a saint — in 2003.