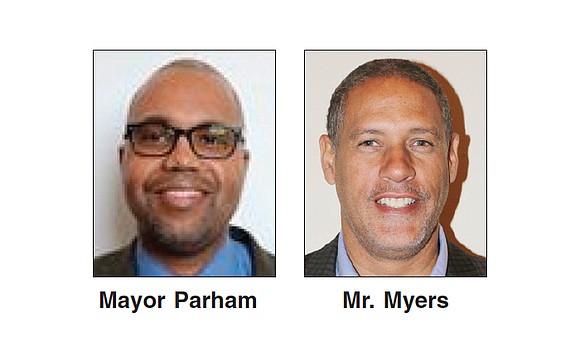 They are no longer facing a trial on petitions from a faction of voters in each of their districts seeking their removal “for neglect of duty, misuse of office and incompetence” for failing to properly address the city’s severe financial troubles since their election in 2014.

The cases collapsed because of a procedural mistake by leaders of Clean Sweep Petersburg, the group that filed the petitions seeking Mayor Parham’s and Councilman Myers’ removal.

The group spent months collecting signatures from 10 percent of the registered voters in each district.

Essentially, the group asked Judge Teefey to allow them to withdraw the petitions and end the cases after he found merit in an argument from James E. Coleman Jr., the attorney for the two council members.

Mr. Coleman argued that the group’s lengthy list of reasons for seeking the removal of the two elected officials was not attached to the petitions that voters signed. He noted that state law required the petition and the explanation to be together so that people signing could know the justification before they signed.

Barbara Rudolph, a founder and leader of Clean Sweep Petersburg, agreed that was a problem.

“The judge was clearly finding the form and the procedure of our petition to be lacking, and I certainly take full responsibility for that,” she said, noting she is not an attorney and is learning as she goes along.

She said the group will restart the petition campaign and do it right this time. Still, the group took eight months to collect a few hundred signatures in each ward.

“I just want to continue to move forward with the process of helping our citizens move the city forward,” he said.

Now in his second term on the Petersburg City Council, he said his goal is to “continue to do the good work that we have done in the past and not based on the accusations and rumors that have been swirling for the last year.”

“Justice was served,” Mayor Parham said as he left the court. “I always welcomed the procedure and believed that the facts would come out.”

Mayor Parham, who is in his first term on the council, was critical of those who brought the petitions.

“Elections are won in November,” he said, “and to use taxpayer dollars to replay those election results is hurting our city here. We have limited dollars.”

The city will be picking up the tab for Mr. Coleman’s services. The council voted earlier this month to cover the legal costs. Both the mayor and Councilman Myers took part in the 5-2 vote, despite criticism that they had a conflict of interest.

While Commonwealth’s Attorney Cassandra Conover has opined that Mayor Parham and Mr. Myers violated state law in taking part in the vote, she has few options because the city attorney, Joseph E. Preston, determined both men could vote on the issue.