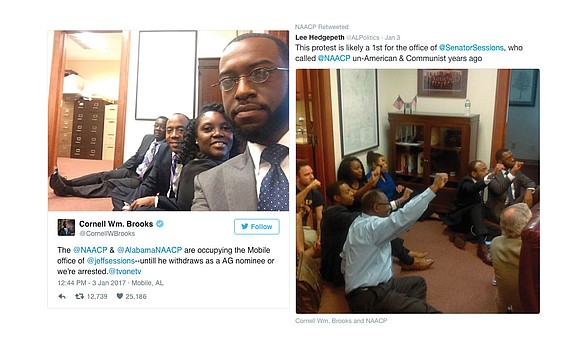 Six civil rights leaders were arrested, including Cornell W. Brooks, president and CEO of the national NAACP, and Stephen Green, national director of the youth division of the NAACP, according to a post on the Twitter page of the nation’s oldest civil rights organization.

The group was protesting Sen. Sessions’ nomination by President-elect Donald Trump as the nation’s next attorney general, criticizing his record on voting rights and race relations.

Members of the NAACP vowed to occupy Sen. Sessions’ Mobile, Ala., office until the conservative Republican lawmaker either withdrew as a candidate or they were arrested.

Also among those arrested was Bernard Simelton, president of the NAACP’s Alabama state conference, according to local news outlet AL.com.

The six protesters were charged with misdemeanor criminal trespassing, according to CNN.

Sen. Sessions, 70, has a history of controversial positions on race, immigration and criminal justice reform.

The NAACP also held demonstrations at Sen. Sessions’ other offices in Alabama.

“Sen. Sessions has callously ignored the reality of voter suppression but zealously prosecuted innocent civil rights leaders on trumped-up charges of voter fraud,” Mr. Brooks stated in a news release. “As an opponent of the vote, he can’t be trusted to be the chief law enforcement officer for voting rights.”

Mr. Brooks posted a photo on Twitter of protesters in suits occupying the senator’s office in Mobile.

A spokeswoman for Sen. Sessions called the NAACP’s criticisms “false portrayals ... that have been thoroughly rebuked and discredited.”

“Jeff Sessions has dedicated his career to upholding the rule of law, ensuring public safety and prosecuting government corruption,” spokeswoman Sarah Isgur Flores said in a statement. “Many African-American leaders who’ve known him for decades attest to this and have welcomed his nomination to be the next attorney general.”

After his election in November, Mr. Trump nominated Sen. Sessions to lead the U.S. Justice Department and the FBI. His history could see scrutiny during a confirmation process before his fellow senators.

Sen. Sessions was a federal prosecutor in 1986 when he became only the second nominee in 50 years to be denied confirmation as a federal judge. This came after allegations that he made racist remarks, including testimony that he had called an African-American prosecutor “boy,” an allegation he has denied.

Sen. Sessions denied he was a racist and said at those hearings that groups such as the NAACP and the American Civil Liberties Union could be considered “un-American.”

He also acknowledged that he had called the Voting Rights Act of 1965 a “piece of intrusive legislation.”