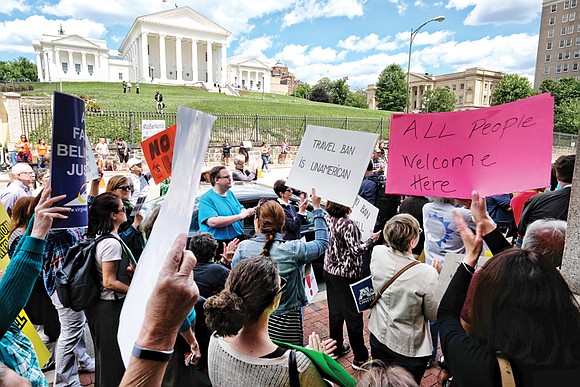 Protesters gather on the Bank Street side of the 4th U.S. Circuit Court of Appeals in Downtown to make their views known about President Trump’s travel ban against people from six Muslim-majority nations. Inside, the federal appeals court was hearing arguments Monday in the legal challenge to the president’s March executive order banning U.S. entry to people from the targeted nations.

The challenge to President Trump’s revised travel ban moved to Richmond on Monday, where nearly 200 protesters opposed to the U.S. ban on travelers from six Muslim-majority nations held signs, chanted and listened to an array of religious leaders outside the federal courthouse in Downtown as legal arguments started inside.

Judges from the 4th U.S. Circuit Court of Appeals peppered a U.S. Justice Department lawyer with tough questions about President Trump’s temporary ban, with several voicing skepticism that protecting national security was the aim of the policy.

The court wrestled with whether it should look beyond the text of the president’s executive order to comments made by President Trump on the campaign trail and after his election in order to determine whether the policy illegally targets Muslims.

“That’s the most important issue in the whole case,” said Judge Robert B. King, who was appointed to the court by President Clinton.

The arguments were heard by 13 judges, six of whom expressed concerns about reviving the order that prohibited for three months entry visas for citizens of Iran, Libya, Somalia, Sudan, Syria and Yemen.

But three Republican appointees on the court seemed to lean toward the administration, asking whether the president should be second-guessed when it comes to protecting the country’s borders and whether the plaintiffs bringing the suit had been sufficiently harmed by the order.

“You have the judiciary supervising and assessing how the executive is carrying out his office,” said Judge Paul Niemeyer, who was appointed by President George H.W. Bush.

He pressed Omar Jadwat, the American Civil Liberties Union lawyer representing the plaintiffs who challenged the order, who seemed to stumble at times after pointed questioning by the judges.

“I just don’t know where this stops,” Judge Niemeyer said.

The judges gave few clues as to how they might rule. No decision was issued Monday. Regardless of how the 13 judges rule, the matter is likely to be decided ultimately by the U.S. Supreme Court.

On March 15, federal Judge Theodore Chuang of Maryland put the ban on hold just a day before it was to go into effect after a challenge by refugee organizations and individuals who said they and family members were being discriminated against because they were Muslim and were adversely affected by the ban.

Judge Chuang cited President Trump’s comments as evidence that the order is a realization of his repeated promise to bar Muslims from entering the country.

The arguments marked the latest legal test for President Trump’s immigration ban, which also was blocked by federal Judge Derrick Watson in Hawaii in a separate legal challenge. The administration’s appeal in that case will be heard in Seattle on Monday, May 15, by a three-judge panel of the San Francisco-based 9th U.S. Circuit Court of Appeals. The three judges assigned all are Democratic appointees.

An earlier version of the ban, issued on Jan. 27 and that included Iraq among the targeted nations, also was blocked by the courts. That order, which went into effect immediately, triggered chaos and protests at airports, including Dulles International Airport in Northern Virginia and in several cities, before being put on hold due to legal challenges.