Gardens sprouting from the work of area churches 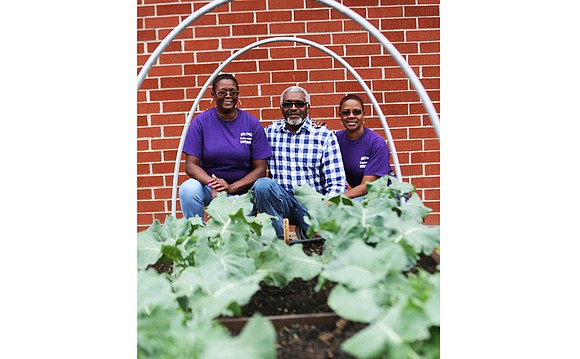 At Second Baptist Church in South Side, volunteer gardeners are preparing to produce a cornucopia of vegetables and herbs on a quarter-acre garden plot next to the sanctuary on Broad Rock Boulevard.

Separately, 31st Street Baptist Church in Church Hill and its nonprofit partner, Tricycle Gardens, are in the midst of their renewed effort to grow a bounty of fresh food for East End residents on the nation’s first designated urban farm that sits on nearly an acre behind the sanctuary.

And Sixth Mount Zion Baptist Church in Jackson Ward is in the throes of testing urban gardening in raised beds installed by a parking lot in a partnership with Lewis Ginter Botanical Garden.

Across the community, African-American churches are taking a leadership role in the community gardening movement in Richmond.

The purpose: To bring fresh produce to areas where residents without personal transportation live a mile or more from a full-service grocery store.

The most ambitious project is being spearheaded by one of the area’s largest churches, St. Paul’s Baptist, the Henrico County-based, 9,000-member worship center that Dr. Lance Watson leads.

The church, which has had a community garden in past years through a partnership with the nonprofit Another Chance to EXCEL, or ACE, is going bigger this year with a program called “Let’s Get Growing.”

St. Paul’s is teaming with the National Black Farmers Association, as well as ACE and another nonprofit, Kinfolk Community Empowerment Center, to develop a 5-acre garden on its land on Creighton Road, the site of its main sanctuary.

The project also calls for growing produce at two other locations. One is Farmstrong, a community garden at Armstrong High School on Cool Lane. The other is a section of the Mosby Court public housing community northwest of Martin Luther King Jr. Middle School, where a community gardening effort is to be expanded.

The church’s plans call for planting 20 to 30 gardens, up from 15 household gardens last year and seven the year before.

“We hope to create employment opportunities, along with fresh produce for sale to stores and area residents,” said Arthur Burton, founder and chief executive of Kinfolk Community Empowerment Center that aims to help people in the Mosby Court area.

He said the NBFA expects to provide gardening equipment and to partner with agricultural extension agents from Virginia State University to offer gardening training to residents.

The goal, he said, is to use urban gardening as way to teach people to cut their food budget, become more self-sufficient, improve their neighborhoods and potentially create employment.

The garden at Second Baptist is a prime example of the partnerships churches are creating to make gardens more than produce centers.

Dubbed Eden’s Community Garden, the space has developed through a partnership between the church led by the Rev. Ralph S. Hodge and the Chesapeake Bay Foundation.

Second Baptist, which occupies a former grocery store, got involved because it was tired of facing a $7,800 annual bill from the city for stormwater control. The foundation was seeking a partner to showcase ways to reduce polluting runoff from big parking lots like the one at the church.

Using a federal grant, the foundation enabled the church to install a 10,000-gallon cistern to collect rainwater, which became irrigation for the garden during the hot summer.

In wet times, much of the overflow from the cistern is stored in trenches 6 feet deep that were excavated beneath the garden and filled with gravel and topsoil to filter the water.

“It’s a beautiful thing to be here on a day of heavy rain and watch this system work,” Rev. Hodge said. “It soaks up the runoff nutrients that the bay doesn’t need, but our plants do.”

The church also gave up 18 parking spaces on the parking lot in the front to create a rain garden to collect more of the runoff.

The project is self-supporting through the sale of the produce to church members, with the rest used in the church’s kitchen or distributed to neighbors in need.

The church also works to spread the community garden message through classes that it invites VSU’s extension agents to hold for area residents.

As Rev. Hodge has found, the church’s gardening success is reliant on the willingness of church members to get involved.