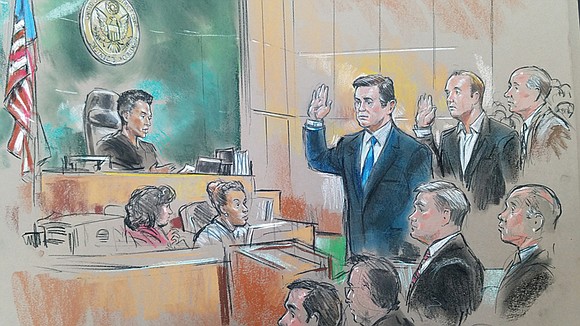 Former Trump campaign manager Paul Manafort, center, and campaign deputy Rick Gates, right, appear Monday before U.S. Magistrate Judge Deborah A. Robinson in federal court in Washington during a hearing on the first charges stemming from an investigation by special counsel Robert Mueller into Russian meddling in the 2016 presidential election.

President Trump’s former campaign manager, Paul Manafort, and his former deputy, Rick Gates of Richmond, were indicted in federal court on Monday in a sharp escalation of U.S. Justice Department Special Counsel Robert Mueller’s five-month-old investigation into alleged Russian efforts to tilt the 2016 election in President Trump’s favor and into potential collusion by his aides.

Mr. Mueller announced the charges against Mr. Manafort, 68, and Mr. Gates, 45, and that a third Trump adviser, George Papadopoulos, pleaded guilty in early October to lying to the FBI about meetings with Russian intermediaries.

The indictment lays out 12 counts against Mr. Manafort and Mr. Gates, including conspiracy against the United States, conspiracy to launder money, acting as an unregistered foreign agent, making false statements and several charges related to failing to report foreign bank and financial accounts.

The indictment alleges the men, acting as unregistered agents of Ukraine’s former pro-Russian government, moved millions of dollars through hidden bank accounts in Cyprus, St. Vincent and the Grenadines and the Seychelles.

The allegations are not related to campaign activities, but reveal close ties to Russia, and include activities from 2006 to at least 2016 that overlap with the mens’ work on President Trump’s campaign.

With unsecured bonds, they are released without having to pay but will owe money if they fail to appear in court.

There will be another hearing on Thursday, Nov. 2.

President Trump immediately tried to distance himself from the allegations. Before noon on Monday, he said on Twitter that the alledged crimes occurred “years ago” and insisted that there was “NO COLLUSION” between his campaign and Russia.

He also said he has no intention of firing Mr. Mueller, a statement that spokeswoman Sarah Huckabee Sanders reiterated on Monday.

“There’s no intention or plan to make any changes with regard to the special counsel,” she said.

U.S. Sen. Mark Warner of Virginia, who is vice chairman of the Senate select committee probing Russian meddling in the 2016 presidential election, called the indictments “a significant and sobering step in what will be a complex and likely lengthy investigation” by Mr. Mueller.

“That is why it is imperative that Congress take action now to protect the independence of the special counsel, wherever or however high his investigation may lead,” Sen. Warner said in a statement.

The indictments allege Mr. Manafort and Mr. Gates concealed millions of dollars they made while acting as agents of Ukraine on behalf of a pro-Putin political party whose leader, Victor Yanukovych, was president from 2010 to 2014.

Meanwhile, potentially more perilous for President Trump was the guilty plea by Mr. Papadopoulos, his former foreign policy adviser, who admitted in unsealed court papers that he was told in April 2016 that the Russians had “dirt” on Mrs. Clinton in the form of “thousands of emails,” well before it became public that the Democratic National Committee and Clinton campaign chairman John Podesta’s emails had been hacked.

Mr. Papadopoulos has been cooperating with investigators, according to the court papers. His lawyers hinted strongly in a statement Monday that their client has more testimony to provide.