Salacious FBI file on Dr. King shows extent to which agency tried to discredit him 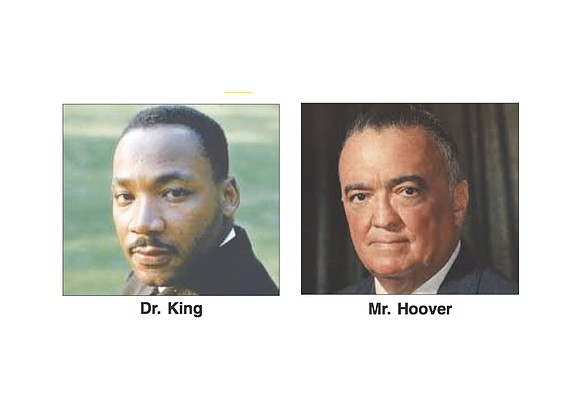 The 20-page document, dated just three weeks before the civil rights leader’s assassination in April 1968 in Memphis, Tenn., was released Friday, Nov. 3, with a batch of FBI documents related to the assassination of President John F. Kennedy.

President Kennedy is not referenced in the file, and it is not clear why the King document was kept secret for almost 50 years.

There also is no evidence that the claims in the document were verified. Instead, it makes clear the FBI’s focus under the late director J. Edgar Hoover was to dig up dirt on a man who had become an icon in this nation.

Mr. Hoover had authorized an extensive surveillance program on Dr. King in the 1960s. It was part of the FBI’s larger domestic counterintelligence program, which was the subject of great criticism in hindsight and resulted in many reforms.

Several King scholars have debunked the allegations in media reports throughout last weekend, saying many are neither new or true.

“When we look closely at this, what we see is that there is a person who is trying his best to damage Martin Luther King’s reputation,” said Clayborne Carson, director of the Martin Luther King Jr. Research and Education Institute and a Stanford University history professor, referring to Mr. Hoover.

“The number one thing I’ve learned in 40 years of doing this is just because you see it in a top-secret document, just because someone said it to the FBI, doesn’t mean it’s all accurate,” said David Garrow, a Pulitzer Prize-winning author and historian who has written extensively about Dr. King.

One allegation, that Dr. King had a mistress in California with whom he fathered a child, was attributed to “a very responsible Los Angeles individual in a position to know.”

Among its other accusations are that:

• Dr. King was surrounded by advisers with strong links to the Communist Party USA.

• His statements were always subject to approval by the alleged communist sympathizers.

• He was a secret supporter of communism, “a whole-hearted Marxist.”

• The SCLC, which he founded, was set up as a “tax dodge” to raise funds for its activities.

• He had affairs with at least four women, including folk singer Joan Baez.

The document alleges that Dr. King and the SCLC were heavily influenced by Stanley Levison, a lawyer and businessman who financed the Communist Party USA for years.

The dossier tries to tie Dr. King to the Communist Party through Mr. Levison even though Mr. Levison had left the party years before he met Dr. King. It insists that Dr. King’s Poor People’s Campaign was related to a secret communist agenda without offering any solid evidence.

The March 12, 1968, FBI file also questions whether Dr. King should have been awarded the Nobel Peace Prize in 1964.

It concludes: “These facts about the Nobel Peace Prize winner make his remarks seem incongruous when he replied after winning this cherished award, ‘History has thrust me into this position. It would be immoral and a sign of ingratitude if i did not face my moral responsibility to do what I can in the civil rights struggle.’