VSU wins Labor Day Classic before crowd of 10,000-plus in Norfolk 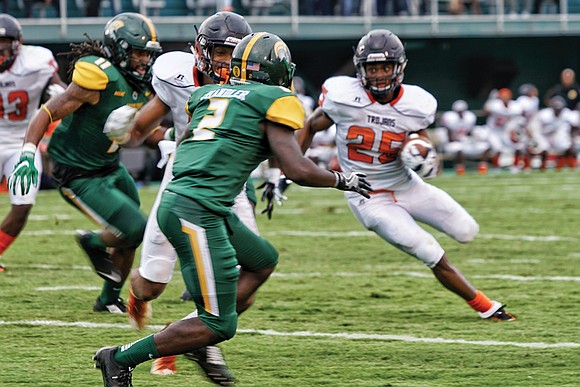 Virginia State University running back Trenton Cannon carries the ball into Norfolk State University territory during Saturday’s Labor Day Classic at Dick Price Stadium in Norfolk. Cannon finished the game with 145 yards on 26 carries, helping the Trojans to a 14-10 victory.

Virginia State University continues knocking out its football opponents — even those in a larger division.

On this occasion, VSU, an underdog on paper, was top dog on the field. 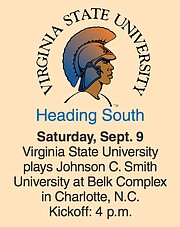 The Spartans had won the previous six meetings between the HBCUs.

Coach Scott left VSU three years ago for the better-paying post at NSU in the higher-profile conference. NSU went 4-7 in each of Coach Scott’s first two seasons at NSU. And the Spartans’ problems could get worse before they improve. The Spartans play host to the College of William & Mary — a school they have never defeated — on Saturday, Sept. 9. NSU then travels to Harrisonburg on Saturday, Sept. 16, to take on James Madison University, the FCS national champion.

Meanwhile, VSU feels like it has wings on its muddy cleats as it prepares to play CIAA rival Johnson C. Smith University Saturday, Sept. 9, in Charlotte, N.C.

Among the nation’s hottest Division II programs, VSU was 9-2 a year ago in Coach Barlow’s first season.

In the Labor Day Classic in Norfolk, VSU dominated the statistics more than the scoreboard. The Trojans had 19 first downs to the Spartans’ 10 and forced eight NSU punts.

VSU quarterback Cordelral Cook scored on two short runs and Trenton Cannon negotiated the wet surface for 145 yards on 26 carries. Cook is a transfer from Alabama State University, where Coach Barlow coached before coming to VSU.

The game was thrilling to the finish.

But defensive back Quincy Watts from Virginia Beach intercepted a Carter pass to ensure the visitors a triumphant ride back to Ettrick.

It was VSU’s first victory over NSU since 2005.

College football can be a small world sometimes.

The 6-foot-4 Ervin passed for 228 yards and ran for 57 yards in Johnson C. Smith’s season opening 38-18 loss to Wingate University.

On Saturday, Sept. 16, VSU will open its home season against defending CIAA champion Winston-Salem State University in what could be a preview of the CIAA championship game in November.