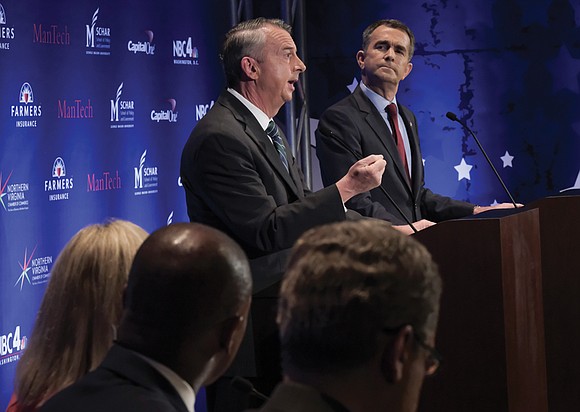 The two major party candidates in Virginia’s closely watched race for governor argued in mostly cordial tones Tuesday over taxes, President Trump and what Virginia should do with its numerous monuments to the Confederacy.

Republican Ed Gillespie said at the candidate debate, held in voter-rich Northern Virginia and televised across the state, that he’s the only candidate with a sense of urgency and the right policies to improve a floundering economy. Virginia’s economic growth has sputtered with a slowdown in federal spending, especially in defense.

“We used to always lead, and now we are lagging,” Mr. Gillespie said, peppering his remarks throughout the hourlong debate with statistics about Virginia’s slow economic growth. He has made cutting the state income tax rate a key campaign platform, which he said would spur more economic growth.

Democratic Lt. Gov. Ralph Northam presented a far different picture of the economy, saying it had made strong progress under current Gov. Terry McAuliffe, a Democrat who is barred from seeking a consecutive term. Lt. Gov. Northam said he would take Virginia to the “next level,” with a focus on improving the economy in rural areas. He also chided Mr. Gillespie for painting a bleak picture of the state, saying that’s counterproductive to the state’s efforts to lure new businesses like Amazon’s proposed second headquarters.

“Amazon doesn’t want to hear people like you saying — especially if you want to be the next governor — that we’re doing poorly in Virginia,” Lt. Gov. Northam said.

Virginia is one of only two states electing governors in 2017, and the contest is getting national attention as a potential early referendum on the president’s first year. Most polls have shown a close race in the swing state, where Democrats have won every statewide election since 2009.

The debate lacked the kind of sharp-elbowed jabs and name-calling often seen in last year’s presidential debates. Mr. Gillespie is a seasoned communicator who was a senior White House adviser to former President George W. Bush, and a high-paid lobbyist and consultant to Fortune 500 companies. Lt. Gov. Northam is a pediatric neurologist and Army veteran who served in the state Senate from 2008 until he was elected lieutenant governor in 2013.

Mr. Gillespie called Lt. Gov. Northam a “good man” at one point and the two found agreement on some issues, like the need to increase technical and vocational training. During a commercial break, the pair shared a laugh.

But there were some sharp disagreements. Lt. Gov. Northam said Mr. Gillespie’s tax plan was a “tax cut for the rich at the expense of the working class” and the state should instead increase investments in education and transportation spending. Mr. Gillespie accused Lt. Gov. Northam of supporting so-called “sanctuary cities” that would shield unlawful immigrants who commit violent crimes from deportation. Both candidates denied the accusations.

The two also clashed over the state’s numerous Confederate statues, a hot-button issue in the state after a deadly white supremacists rally in Charlottesville in August. Both candidates said local governments should have the final say in what to do with their monuments, but Mr. Gillespie said he favors keeping them in place, while Lt. Gov. Northam said he thinks they should move to museums.

Lt. Gov. Northam also accused Mr. Gillespie of being in lock-step with President Trump, and said such support would hurt Virginia’s economy if Mr. Gillespie wins the election. Lt. Gov. Northam was especially critical of Republican efforts in Congress to repeal and replace the Affordable Care Act, efforts that Mr. Gillespie has been noncommittal on.

Mr. Gillespie has kept President Trump at arm’s length and deflected a question about the president at Tuesday’s debate to instead talk about the number of policy proposals he has introduced, criticize Lt. Gov. Northam for not having a detailed tax plan and mention that former GOP Sen. John Warner had endorsed Mr. Gillespie earlier Tuesday.