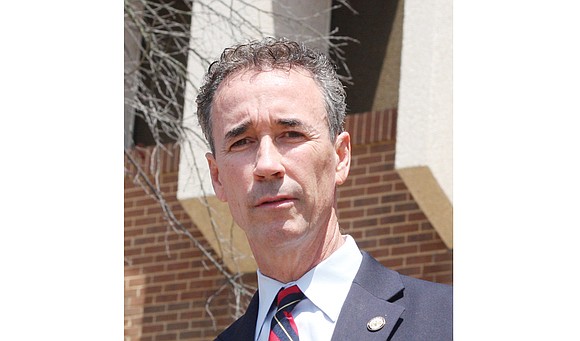 “Fighting Joe” has been hit with a knockout blow.

For the second time in his career, Joseph D. “Joe” Morrissey, a savvy attorney and former Richmond prosecutor who built a reputation as a courtroom battler, has lost his license to practice law.

While dismissing 18 of the 21 charges the regulatory Virginia State Bar brought against him, a three-judge panel hit the 60-year-old Mr. Morrissey with the harshest punishment possible — revocation of his law license.

If the judges’ decision stands, Mr. Morrissey would have to close his law practice based in Highland Springs and could not represent clients in state courts.

He could still teach, work behind the scenes and be involved with clients in administrative cases involving government agencies. He also could run for public office — and there is a rumor he might do so again.

Mr. Morrissey and his legal team, however, are promising what many consider a long-shot appeal to the Virginia Supreme Court.

Mr. Morrissey did not respond to a Free Press request for comment.

The decision, which was not unexpected, came March 30 from a three-judge panel that spent a week hearing testimony at the John Marshall Courts Building.

The panel, led by Chief Judge Paul W. Cella of the 11th Judicial Circuit, made the revocation effective June 15 to give Mr. Morrissey time to inform his clients and wrap up any legal cases.

The panel, which also included senior Judges Jonathan C. Thacher of Fairfax and Louis R. Lerner, deliberated for an hour after testimony and arguments concluded, but offered little public explanation for choosing disbarment over a license suspension or a reprimand.

Revocation was what attorneys for the State Bar had sought after spending nearly three years investigating and preparing the case. For them, the ruling represented vindication.

Nearly six years ago, a divided state Supreme Court voted 4-3 to reinstate Mr. Morrissey’s law license over the objections of the State Bar. Mr. Morrissey had been disbarred in 2003 for violating legal codes of conduct and the State Bar argued in 2012 that he had not changed.

Members of Mr. Morrissey’s legal team, including state Sen. William M. Stanley Jr., requested a 30-day suspension based on dismissal of the bulk of the charges.

Sen. Stanley said afterward that Mr. Morrissey’s legal team would request the Supreme Court delay imposition of the panel’s decision while the appeal is under consideration. However, the state’s highest court appears to be reluctant to put a hold on revocation during an appeal, a review of past cases indicates.

The crux of the case against Mr. Morrissey involves his 2013 relationship with Myrna Pride, then a 17-year-old receptionist working in Mr. Morrissey’s law office.

The two allegedly had a sexual relationship soon after she started working at the firm that was reported to police. He was convicted in Henrico Circuit Court in December 2014 of contributing to the delinquency of a minor, a misdemeanor. He served a three-month jail term while serving as a member of the General Assembly.

At the time, Mr. Morrissey and Ms. Pride denied they’d had a sexual relationship. They have since wed and have three children.

The State Bar alleged Mr. Morrissey lied to the court and engaged in a cover-up in violation of legal ethics, but the three-judge panel threw out those charges as unproven. However, it found “clear and convincing evidence” that Mr. Morrissey, through his criminal conviction, had violated a state bar rule for “committing a criminal or deliberately wrongful act that reflects adversely on the lawyer’s honesty, trustworthiness or fitness to practice law.”

The panel also threw out charges related to Mr. Morrissey’s representation of the once planned National Slavery Museum and former Gov. L. Douglas Wilder after Mr. Wilder did not show up at the hearing to testify.

Mr. Wilder came to the hearing a day late, on Friday, asking to be heard. He claimed he had not been properly served with the subpoena.

But the panel of judges declined to reopen the case and sent him away. The issues could be revisited if a civil lawsuit Mr. Morrissey refiled seeking payment from Mr. Wilder for legal services to the museum ever goes to trial.

At the bar hearing, Mr. Morrissey also was convicted of violating two State Bar rules related to having a young attorney appear at a hearing in his stead at a perfunctory hearing at which a prosecutor followed through on dropping charges against a client, who was immediately released.

The attorney had passed the bar and received her license, but had not taken a required oath of office when she filled in for Mr. Morrissey, who had a case in another court.

The State Bar said he failed to ensure the young attorney, an associate in his office, had taken the oath before appearing in court and also wrongly assisted her in practicing law before she fulfilled all the requirements.