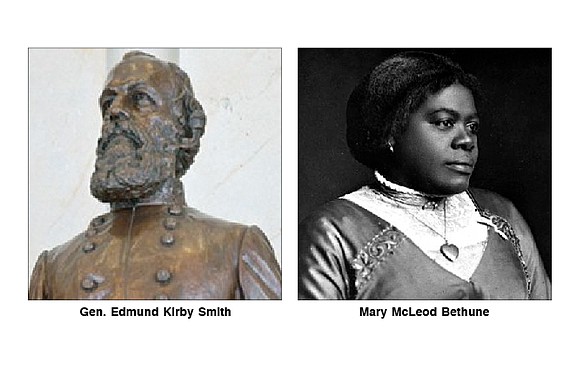 The state Senate voted unanimously on Jan. 31 to install a statue of educator and civil rights leader Mary McLeod Bethune in the spot where a statue of Confederate Gen. Edmund Kirby Smith still stands.

She also served as president of the National Association of Colored Women, was an appointee of President Herbert Hoover to the White House Conference on Child Health and was an adviser to President Franklin Roosevelt.

The university has offered to pay for the Bethune statute, but the cost of transporting both statues has yet to be addressed.

A similar bill is making its way through the Florida House.

The change “is a way of recognizing our history, but also our diversity. It shows Florida in our best light,” said the bill’s sponsor, Democratic Sen. Perry Thurston. “It’s a major message. It shows not only Florida, but the nation that we are coming together and trying to recognize all of our history.”

The Florida legislature voted in 2016 to replace the Smith statue during a nationwide backlash against Confederate symbols in the wake of the 2015 shooting deaths of nine African-American worshippers at historic Emanuel A.M.E. Church in Charleston, S.C.

Despite agreeing to remove the Smith statue from the U.S. Capitol, Florida lawmakers were unable to come up with a replacement during the 2017 legislative session, as the House did not move forward with suggestions from the Great Floridians Program within the state Division of Historic Resources.

At the time, some lawmakers objected to the move, saying it was an effort to erase Southern history.

The statue of Gen. Smith, one of Florida’s two statues in the U.S. Capitol’s Statuary Hall, has been in place since 1922. He is remembered as the last Confederate officer to surrender a significant force at the end of the Civil War, nearly two months after Confederate Gen. Robert E. Lee surrendered to Union Gen. Ulysses S. Grant in Virginia and formally ended the war on April 9, 1865.

Florida’s other representative in Statuary Hall is John Gorrie, widely considered the father of air conditioning.

The law requiring the removal of the Smith statue set up a process to replace it.

An independent committee reviewed 130 recommendations from Floridians and presented the legislature with three choices — Mrs. Bethune; Marjory Stoneman Douglas, who wrote “The Everglades: River of Grass” and is credited with helping create that national park preserving 1.5 million acres of wetlands in southern Florida; and George Washington Jenkins, who started the Publix supermarket chain.

The bill calls for the Smith statute to be taken back to Florida to be put on public display.

Republican Sen. Dennis Baxley, a defender of Confederate monuments who opposed the removal of the Smith statue, said that provision of the bill earned his support.

“I am committed to finding him a place of honor,” Sen. Baxley said. “For the first time, I’ll be voting for this bill.”