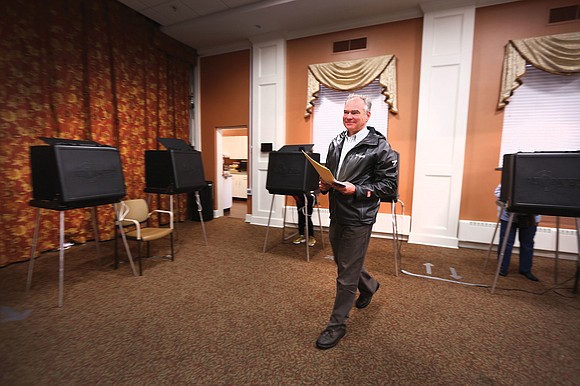 After marking his ballot, U.S. Sen. Tim Kaine of Richmond heads to the machine to cast his vote at Precinct 203 inside The Hermitage Richmond continuing care retirement community on Westwood Avenue in North Side. He and has wife, Anne Holton, have voted at the precinct for the last 28 years. The Democrat easily won re-election over GOP challenger Corey Stewart. Photo by Regina H. Boone Richmond Free Press

U.S. Sen. Tim Kaine declared that Virginia rejected the “the politics of hatred and division … the politics of peddling lies to get ahead” after handily winning re-election to his second six-year term.

“You rejected that because we’ve been there, we’ve done that, we’ve got the scar tissue and we’re not going back,” Sen. Kaine told the crowd at his victory party in Northern Virginia. “… Tonight Virginia showed who we are and who we aren’t,” he said as he prepared to return to a Senate that will be more firmly in the grip of Republicans who won additional seats to expand their majority.

Still, it was a big night for the former Richmond mayor and Virginia governor whose race was called just minutes after the polls closed at 7 p.m. His large margin of victory appeared to help down-ticket Democratic candidates running for the U.S. House of Representatives.

In an election billed as a referendum on President Trump, the 60-year-old incumbent from Richmond amassed 1.9 million votes to 1.3 million for Mr. Stewart and nearly 62,000 for Mr. Waters.

In some ways, the victory over Mr. Stewart, a Trump acolyte who made opposition to illegal immigration one of his key platforms, was even sweeter for Sen. Kaine, who two years ago lost as the vice presidential running mate with Democratic presidential candidate Hillary Clinton to Republican President Trump and Vice President Mike Pence.

While 500,000 more voters turned out statewide than in 2017 when Democrats swept the three top state offices, the total vote of about 3.2 million was well below the turnout of six years ago when 3.8 million people cast ballots in Sen. Kaine’s first win.

Mr. Stewart, 50, a trade attorney who chairs the Prince William County Board of Supervisors, faced an uphill battle. He had about one-tenth the campaign money compared with Sen. Kaine and essentially split his own party with his firebrand style. President Trump did not campaign for him, sending instead Vice President Pence on a single trip to stump for Mr. Stewart.

He used his limited resources to support the Trump approach to issues, including promoting construction of a border wall, while trying unsuccessfully to portray Sen. Kaine as left-leading radical.

In the end, Mr. Stewart did better than expected. He received more votes than Republican Ed Gillespie did last year in his losing bid for governor.

In Mr. Stewart’s view, his loss was not a rejection of his hard-line approach, but the result of “a headwind that was a bit too much,” he told supporters after his third loss in a statewide election. “We gave it a good fight.”

As he did in his campaign, Sen. Kaine emphasized his priorities in his victory address. He said he had “heard loud and clear” in all corners of the state that voters want “a new direction for our country and an economy that truly works for all, health care that is protected, education for all, equality for all, security for all and immigration reform.”

Most of all, he said, voters are demanding restoration “of dignity and respect” to the political process.

During the campaign, the senator portrayed himself as a person who takes a bipartisan approach in trying to get things done, citing his work on an array of successful legislation to boost career and technical training, strengthen the Navy and expand health insurance for people.

In his speech, he said that while he is working to create an immigration system that works, “the other side was running a campaign that ‘demonizes immigrants.’ ”

It is just one area where deep divisions overwhelm efforts to develop solutions, he said.

For that to change, Sen. Kaine said, “what this country needs is a wave of compassion, a wave of character and a wave of decency.”