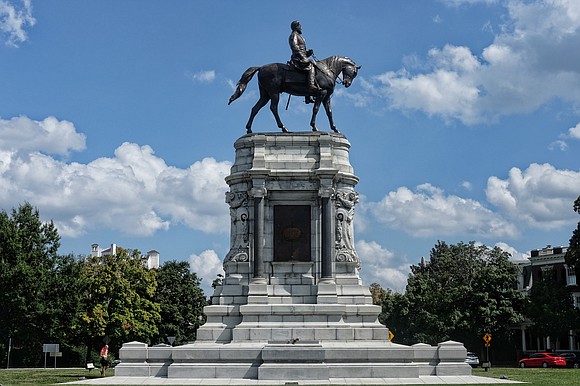 The racist Confederate past has maintained its stranglehold on Richmond’s future.

In a 6-3 vote, Richmond City Council rejected the idea of asking the General Assembly for authority to decide the fate of the symbols of white supremacy and racial hatred on public property in the city, most notably on Monument Avenue, where the five most prominent statutes to the traitorous Confederate cause have stood for a century or more.

The council vote sent a jolting message that the former Confederate capital is not ready to join other metropolitan cities, such as Baltimore, Memphis and New Orleans, in getting rid of the in-your-face symbols of slavery that continue to haunt the present.

For Councilman Michael J. Jones, 9th District, the vote was another stinging defeat just 10 months after council voted 6-2 to shoot down his more robust effort to put the nine-member governing body on record on removing the statues.

Dr. Jones hoped to have an easier time winning votes for his milder resolution, which amounted to a plea to the legislature to allow Richmond to decide what to do with memorials and statues within its borders.

A state law currently blocks the city from altering or removing them.

“I’m baffled by the notion of us not being willing to address matters like this and shirk our responsibilities,” said Dr. Jones, a full-time minister.

“We can only move this city forward by having the right to decide,” Dr. Jones told his colleagues. “We cannot be afraid to tackle the tough decisions of our day because they will go nowhere. We must decide if we’re going to be one Richmond or remain divided.”

After the vote, Dr. Jones called it “most disheartening” that none of the five white council members supported him on an issue important to people of color.

Mayor Levar M. Stoney, who earlier came to the meeting to champion a resolution calling on the state legislature to fully fund the cost of public education for Richmond and other localities, later scolded the council for rejecting the Jones resolution.

“The culture of ‘can’t’ was on full display at #rvacouncil!” the mayor tweeted.

Through his social media message, Mayor Stoney also expressed dismay that several council members refused to support the resolution on the grounds it could interfere with the Richmond campaign to secure more state funding for education.

“We can support choosing our own destiny about the future of confederate monuments in our city AND advocate for the state to fund the true cost of public education. This was not a either/or proposition.#Excuses,” he stated on Twitter.

Before the vote, School Superintendent Jason Kamras also sent a message urging the council not to use the excuse of “RPS funding as a reason to not support monument proposal… If we don’t stand up for what’s right, what are we telling kids about our values? …Nothing’s been stopping you from introducing paper before tonight to increase $ 4 RPS…”

The statue vote dominated a night in which City Council also voted 6-2, with one abstention, to rebate $4.5 million in future taxes to a developer proposing to invest $50 million to create an apartment, office and retail complex in South Side; provide free GRTC bus rides on Election Day, Tuesday, Nov 6; and to rename the city’s Conrad Center in Shockoe Bottom as the Annie Giles Community Resource Center in honor of the late community activist in Whitcomb Court.

The vote on Dr. Jones’ resolution came after at least 20 people spoke at a public hearing, with a majority urging the council to kill it. Most speakers saw the resolution seeking control of statues of Robert E. Lee, Stonewall Jackson and J.E.B. Stuart as an attack on their Confederate ancestors who fought to destroy the Union to maintain slavery.

Among those voicing support was former City Councilman Henry W. “Chuck” Richardson, who called the statues “an affront to my dignity and self-respect.”

The council majority found multiple reasons to reject the resolution.

Councilwoman Kim B. Gray, 2nd District, argued that council needs to focus on the most pressing concern that it wants the state to address — education.

“The biggest monuments to white supremacy are in our schools,” Ms. Gray said. “If we don’t change how we’re operating, nothing will change for the condition of the people of color in our city.”

She noted that the council’s lobbyist, Ron Jordan, had advised that there was little chance in the current legislature of the Jones resolution going anywhere.

Ms. Larson and Mr. Addison argued that the Jones proposal did not match recommendations of the mayor’s Monument Avenue Commission, which called only for removing the statue to Confederate President Jefferson Davis.

Mr. Addison said he could support the resolution only if it were limited to removing that one statue, which Dr. Jones did not agree to.

Dr. Newbille told her colleagues that they were misrepresenting the report. She noted that the resolution only requested that statues other than the one to Jefferson Davis come under council oversight, but did not state that any would be removed.

“This paper allows this council, this local government, to have authority in the dispositions of monuments and statues. For me, that is a responsibility this city and this city council should have,” Dr. Newbille said.

Mayor Stoney has another arrow in his bow on this issue. Once again seeking to bypass the city Planning Commission which is the only city body granted decision-making authority over statues, the mayor introduced legislation to establish the Richmond History and Culture Commission.

The focus of the new commission would be to provide “guidance on the recommendations of the Monument Avenue Commission regarding the reinterpretation of the Confederate statues on Monument Avenue.” Council could vote on the proposal at its next meeting on Monday, Nov. 13.

Mr. Hilbert said before the vote that he believes that Richmond’s Confederate statues will not survive in the long run.

“I was poisoned by the Lost Cause version of the Civil War,” Mr. Hilbert said, “and it’s wrong. The Civil War was about slavery. I do think that, in 50 years, these statues won’t be here.”

Then he gave his blessing to keeping the statues by voting to kill the Jones resolution.