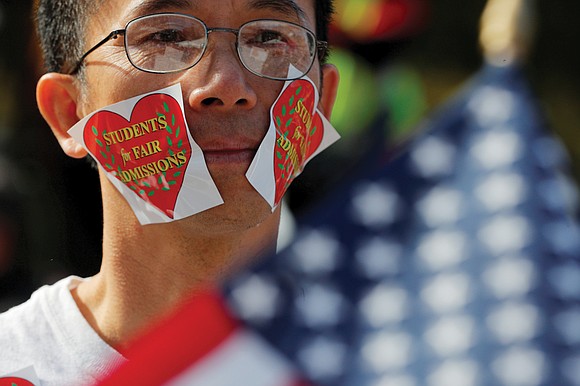 Wearing stickers on his face, an advocate attends “Rally for the American Dream – Equal Education Rights for All” in Boston ahead of the start of Monday’s court hearing in the lawsuit accusing Harvard University of discriminating against Asian-American student applicants. Brian Snyder/Reuters

Harvard University discriminates against Asian-American applicants in order to limit how many it admits, a lawyer for a group suing the school said on Monday at the start of a trial that could have wider implications for the role of race in U.S. college admissions.

The trial in federal court in Boston pits the Ivy League school against Students for Fair Admissions, which was founded by an anti-affirmative action activist and whose case is backed by the Trump administration.

The case eventually could reach the U.S. Supreme Court, giving the newly cemented five-member conservative majority a chance to bar the use of affirmative action to help minority applicants get into college, legal experts say.

In previous rulings on affirmative action, which aims to offset historic patterns of racial discrimination, the nation’s highest court has allowed colleges to include race as one factor among others in assessing applicants.

In his opening statement, Adam Mortara, a lawyer for SFFA, accused Harvard of going further than the court has allowed by engaging in “racial balancing” and keeping Asian-American admissions in the years before SFFA sued in 2014 at or under 20 percent annually.

Mr. Mortara said while Asian-Americans outperformed other groups on academic measures, they received low scores on the “personal” rating that measures an applicant’s subjective likability and grit, a fact he said Harvard cannot prove was not due to racial bias.

“There’s an Asian-American penalty, and it’s significant,” he said.

William Lee, a lawyer for Harvard, countered that SFFA’s claims were based on heavily manipulated data and “invective accusations and innuendo.”

“Harvard never considers an applicant’s race to be negative,” Mr. Lee told U.S. District Judge Allison Burroughs, who is presiding over the non-jury trial. “If it considers race at all, it is always considered in a positive way.”

He said the U.S. Supreme Court had long supported Harvard’s approach, describing it as an “illuminating example” in a landmark 1978 ruling that allowed race to be considered in college admissions in order to promote diversity.

“We’re here because SFFA would like to change that law,” he said.

Asian-Americans, who represent about 6 percent of the U.S. population, comprise 23 percent of Harvard’s current freshman class.

SFFA is headed by Edward Blum, an activist involved in other high-profile cases that have challenged the use of race in colleges admissions.

The Justice Department last month launched a similar investigation into whether Yale University also discriminates against Asian-Americans, an allegation it denies.

Jennifer Holmes, a lawyer with the NAACP Legal Defense Fund representing 25 Harvard student and alumni organizations who support Harvard’s defense, told Judge Burroughs that the university’s policies are helping it move beyond its past as a “bastion of the white, privileged and male.”

“The remedy SFFA seeks would slash the number of minorities on campus and turn back the clock to a time when whites dominated the campus,” she said.