North Side church offers healthy food to all in need 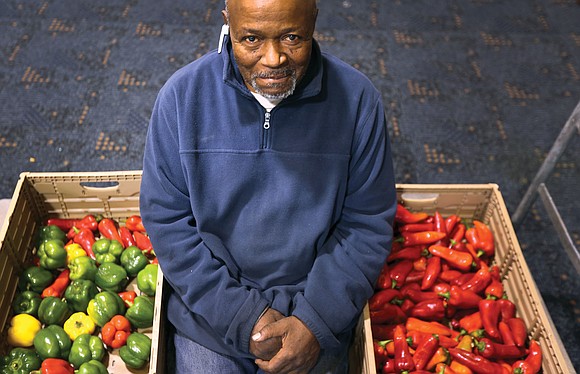 Charles E. Fitzgerald shows off a bounty of fresh peppers that he and other Atlee Church volunteers had ready for distribution at the Moss Side Avenue church last Saturday. Photo by Regina H. Boone Richmond Free Press

At 9 a.m. on any Saturday during the spring, summer and fall, Charles E. Fitzgerald is at his post in the gym at the Atlee Church in North Side, waiting to give away fresh greens, kale, collards, peppers, sweet potatoes and similar items to anyone who walks in.

In the seemingly prosperous, middle-class area where the church is located, this kind of service might seem unnecessary.

“It may not seem like it, but we have pockets of poverty in this area, and there are plenty of people who live around here who need this kind of healthy food,” said the 62-year-old Richmond native who serves as director of building and grounds for the church at 3121 Moss Side Ave. “That’s why I am doing this.”

The produce comes from Shalom Farms in Goochland County, a 10-year-old, regional nonprofit food production and community development project that the United Methodist Urban Ministries of Richmond launched in 2008.

The 12-acre operation produces tons of fresh vegetables each year in pursuing its mission to work with communities “to ensure access to healthy food.”

However, not all of the food that is harvested weekly gets distributed, and that’s where Mr. Fitzgerald comes in. He serves on the board and agreed to use space at the church as a distribution point.

He started out doing it once a month in concert with a food pantry run by the church. This year, he went to once a week, with help from a team of volunteers.

His team includes Kenneth Burnett Sr., Liller F. McGill and Kurk Wagner, who deliver the items to the church to be ready for the first arrivals on Saturdays.

Sometimes there is huge array, sometimes less, Mr. Fitzgerald said. “It just depends on what is available,” he said. “We never know until we go to the pickup point.”

And if some of the items are left, Mr. Fitzgerald has community leaders he calls who will arrange to get them into the homes of seniors, disabled people and others who could not get to the church.

“It’s a good system,” he said. He said the distribution this year would continue until just before Thanksgiving, when Shalom Farms will end its harvests and begin preparing for the spring.

Mr. Fitzgerald’s operation is part of a loose network that seeks to tackle hunger in the city.

Among the leaders are FeedMore and its Central Virginia Food Bank, which distributes mostly nonperishable items through churches and community locations.

Other places include Zion Baptist Church on Decatur Street in South Side, which has become a major distribution point for free food, ranging from meats and vegetables to cakes and breads donated by several area Kroger stores. On weekday afternoons and most weekends, the church is open to people who come for the items.