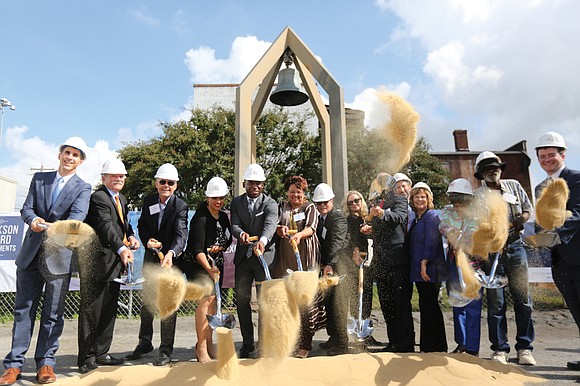 Mayor Levar M. Stoney, center, is flanked by City Council members Kim Gray, center left, and Ellen Robertson as he leads the official groundbreaking Tuesday for a $34 million apartment complex going up on the former site of St. Joseph’s Catholic Church at 1st and Jackson Streets in Jackson Ward. The bell in the background is the last remnant of the long demolished church that at one time was the first Catholic church in the country built for a black congregation. When completed, the complex is to include 154 units, with 72 to be set aside for current residents of Fay Towers, which is being vacated. Also taking part are representatives of the development partners the Richmond Redevelopment and Housing Authority and the Community Preservation and Development Corp., as well as those of other participating public agencies and private companies. Photo by Regina H. Boone Richmond Free Press

The heat is finally working in all 411 public housing units where serious problems occurred last winter, according to the Richmond Redevelopment and Housing Authority.

That includes 78 units in Creighton Court, where new baseboard heat was installed and 333 units where radiators were repaired or replaced.

The U.S. Weather Service lists Oct. 15 as the start of the winter season.

The work was finished as RRHA begins to see progress on several of its planned developments in Jackson Ward and the East End.

To ensure the heat works in nearly 4,000 other RRHA housing units, Mr. Artze said the authority will inspect and test radiators and other equipment in every unit, including the operation of boilers and radiators that remain the primary source of heat.

In addition, he said RRHA has hired a contractor to install baseboard heat in units if radiators stop working. He said he’s expecting to find boiler problems, but “we don’t want to have a repeat of last year,” he said, when a boiler failure left families in the 78 Creighton units shivering for weeks in cold apartments.

The problem finally was solved when new baseboard electrical heaters were installed, but it took nearly two months to get the work done and led to the resignation of T.K. Somanath as RRHA’s chief executive.

The 65-year-old Mr. Artze, who has been handling the job on an interim basis, said he is not competing for the permanent job. He said RRHA’s board of commissioners is interviewing six or more semifinalists and could introduce the new director possibly before Thanksgiving.

Mr. Artze offered the heating update ahead of the groundbreaking ceremony for 154 new apartments at 1st and Jackson streets that RRHA is developing in a partnership with the Washington-based nonprofit Community Preservation and Development Corp.

Seventy-two of the units in the $34 million project are reserved for current residents of nearby Fay Towers, with the other 82 available to the public.

The Jackson Ward development is the first of two phases; the second phase is the redevelopment of the former Baker Elementary School into 51 housing units that will be reserved for the remaining tenants in Fay Towers.

Fay Towers contains 200 apartments, with 77 vacated when residents were moved to a renovated former school in Highland Park.

Mr. Artze and representatives of CPDC said the Baker School renovation could begin in January. Financial challenges have held back the start date, they said.

Financial challenges also have created problems for the planned development of new housing on the former Armstrong High School site in the 1600 block of North 31st Street in the East End, the first step in replacing Creighton Court. Another nonprofit, The Community Builders Inc. of Boston, is partnering with RRHA on that project.