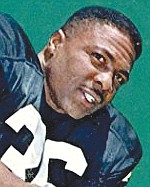 Mr. Daniels rushed for 5,138 yards — the most ever by an AFL back — while also catching passes for 3,314 yards and scoring 54 touchdowns.

The merger of the upstart AFL and the established NFL was announced June 8, 1966.

He starred at Prairie View A&M University, where he led his team to the NAIA national championship. He signed with Dallas as a free agent and was among the first professional stars to come from an historically black college or university.

In 1965, Mr. Daniels helped organize a boycott of the AFL All-Star game in New Orleans when black players were denied the same amenities as white players.

Mr. Daniels is a member of Prairie View’s Hall of Fame and made the AFL’s All-Time team.