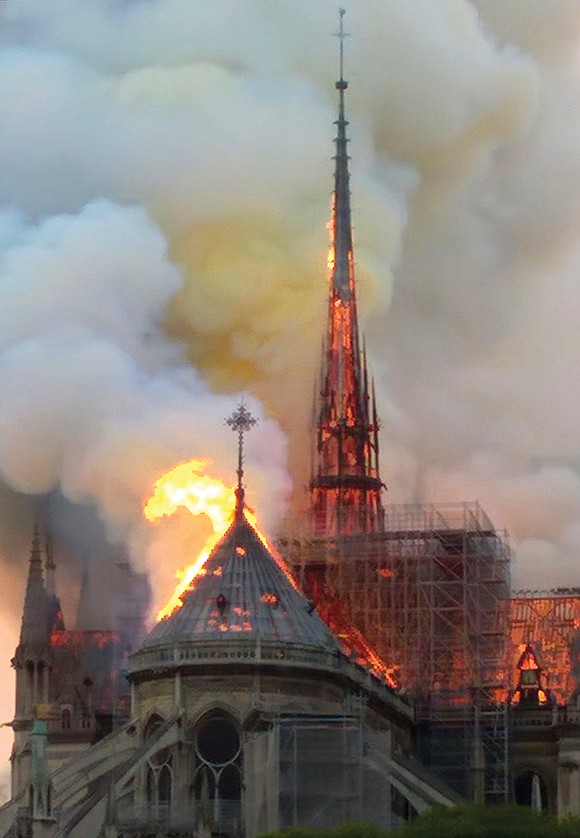 A catastrophic fire shoots up the spire of Notre Dame Cathedral in Paris on Monday, threatening one of the architectural treasures of Europe. Dominique Bichon/Associated Press

George K. Martin of Mechanicsville and his wife, Anita, arrived in Paris on Sunday night and made a sightseeing list that included some of the top tourist spots in the City of Lights, including Notre Dame Cathedral.

But instead of heading to Notre Dame on Monday, the couple toured the Paris Opera House.

Hours later, the couple realized their choice may have been an unfortunate mistake.

Mr. Martin, managing partner of McGuireWoods’ Richmond office, got a news alert on his cellphone that the iconic Notre Dame was burning.

“We heard a lot of sirens,” Mr. Martin said in a telephone interview with the Free Press late Monday from Paris. When the couple left their hotel for dinner, scores of people lined a bridge across the Seine River, watching as smoke and flames rose from the cathedral.

“It’s sad and hard to believe that something that is 850 years old and been around through so much history, including the French Revolution, was suddenly going up in smoke,” Mr. Martin said. “People were in shock and disbelief.”

The timing, just days before Easter, makes it even more tragic, he said.

“I wish we had gone there,” Mr. Martin lamented, adding he would be scouting for postcards of the cathedral and its interior. “I hope they can rebuild.”

With the flames extinguished, experts on Tuesday began assessing how much the shell of Notre Dame has been damaged and how many years — maybe decades — it will take to repair and rebuild.

Paris, all of France and people watching live television around the world held their breath Monday evening as a sudden fire in the edifice claimed the roof, felled the elegant spire that stood atop its transept and spread down into the nave to threaten priceless religious relics and artwork.

About 400 firefighters battled the blaze, pumping water into the nave and trying to keep flames away from the giant stained glass rose windows and the endangered northern bell tower of the most visited monument in Europe.

French President Emmanuel Macron and Paris Mayor Anne Hidalgo took a quick look inside the building Monday evening as firefighters fought the blaze. President Macron emerged to announce that France would rebuild the state-owned cathedral “because that’s what the French expect, because that’s what our history deserves, because it’s our profound destiny.”

Mayor Hidalgo described a hole in the roof where the spire crashed through but added a hopeful note. “The altar and its cross were preserved,” she said. “It’s less terrible than I feared.”

Standing outside the monument Tuesday, Paris prosecutor Rémy Heitz contradicted speculation that the fire was an attack on Notre Dame.

“There is nothing that indicates a voluntary act,” he said. His office announced it had opened an inquiry into a case of “involuntary destruction by fire.”

Reconstruction will probably take decades and cost hundreds of millions of euros.

The investigation will be “long and complex,” Mr. Heitz warned, adding that his staff had begun quizzing several dozen workers who had been doing renovation work on the roof. All had already called it a day on Monday before the fire broke out about 6:20 p.m. Paris time.

The spire that fell amid the flames was due to be repaired and 16 statues that surrounded it had already been removed last week. Scaffolding over that part of the roof was still standing on Tuesday as Parisians and tourists flocked to the streets around Notre Dame to catch a glimpse of the damage.

The cathedral roof was entirely gone after the “charpente,” the thick network of wooden supports between the vaulted stone ceiling of the cathedral and the peaked roof of lead tiles above it, burst into flames. Burned timber and tiles crashed into the cathedral, mixing into sludge with the water pumped in to put out the fire.

Embers from the spire and roof were still smoldering Tuesday morning around the modern altar, at the intersection of the nave and transept, and parts of the wood-paneled choir stalls leading to the old altar at the back of the cathedral appeared burned in photographs.

But a wreath said to be the crown of thorns that Jesus wore was saved, as was a tunic of St. Louis, the 13th century French king and saint who bought this and other relics and brought them to his capital.

The Treasury, a museum of chalices, vestments and artwork down the centuries not far from the choir area, also was untouched.

Some but not all of the centuries-old paintings from the side chapels were rushed out to the nearby Paris City Hall, officials said, and firefighters kept sprinkling the rose windows to avoid them overheating and falling apart.

The grand organ, another of the jewels of Notre Dame, was “a priori” saved from the flames, but would probably have to be dismantled and rebuilt, church officials added.

“It was a stroke of luck because that is an irreplaceable part of our national heritage,” said Olivier Latry, one of the cathedral’s three organists. Mr. Latry, who recently recorded a selection of Johann Sebastian Bach’s organ works there, last played in the cathedral Sunday evening.

The cathedral’s north bell tower, the one to the left when visitors approach the main entrance, was in danger of catching fire Monday evening, but firefighters were able to keep the flames at bay. Had the blaze reached it, its eight bells could have crashed to the ground, bringing down the tower and probably its southern twin as well.

Over the next few days, architects must examine the standing stone structure to see if the blaze caused any structural damage to the Paris limestone that was heated to several hundred degrees and then doused with cold water pumped in from the Seine River.

Offers to contribute to the reconstruction of the building poured in, with more than 600 million euros pledged by rich French businesses and several private funds launched on the internet. A national collection announced by President Macron began taking pledges Tuesday.

A large timber company offered its best oak to rebuild the roof supports, but it was not sure it could duplicate the massive beams that dated back to the 13th century. The cathedral in the northern French city of Reims was rebuilt after its almost complete destruction in World War I with supports of reinforced concrete.

“ ‘This is the place for everyone. I am crying with you,’ ” Archbishop Aupetit quoted it as saying.

The French Council of the Muslim Faith urged France’s large Muslim community to contribute to “the reconstruction of this architectural masterpiece that is the glory of our country” and expressed “its solidarity and fraternity with Christians around the world.”

François Clavairoly, president of the Protestant Federation of France, tweeted “solidarity and fraternal thoughts in Christ to all Christians and to all those for whom this exceptional symbol has meaning.”

The central place Notre Dame has in France’s national heritage was apparent when a caller to FranceInfo radio broke down in tears trying to explain his sorrow.

“I’m an atheist and I’m always badmouthing the clergy, but this is 850 years of our history that’s gone up in fire,” the caller said.