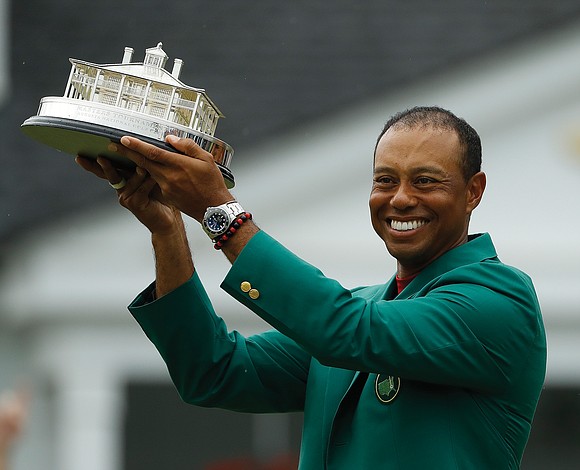 Tiger Woods holds the championship trophy wearing the green jacket donned by winners after coming from behind to claim victory Sunday at the Masters Tournament in Augusta, Ga. Matt Slocum/Associated Press

The fallen hero and crippled star is now a Masters champion again.

The 43-year-old Tiger Woods thrilled viewers — and himself — as he rallied to win the Masters Tournament for the fifth time on Sunday in a comeback that goes well beyond the two-shot deficit he erased before a delirious audience that watched memories turn into reality at Augusta National.

Tiger had gone nearly 11 years since he won his last major, 14 years since that green jacket was slipped over his Sunday red shirt. He made it worth the wait, closing with a 2-under 70 for a one-shot victory and setting off a scene of raw emotion.

He scooped up his 10-year-old son, Charlie, born a year after Tiger won his 14th major at Torrey Pines in the 2008 U.S Open. He hugged his mother, Kultida Woods, and then 11-year-old daughter, Sam, and everyone else in his camp that stood by him through a public divorce, an embarrassing DUI arrest from a concoction of painkillers and four back surgeries, the most recent one just two years ago to fuse his lower spine.

Tiger won his 15th major, three short of the standard set by Jack Nicklaus. It was his 81st victory on the PGA Tour, one title away from the career record held by Sam Snead.

“Congratulations, Tiger! To come back and win the Masters after all the highs and lows is a testament to excellence, grit and determination,” President Obama tweeted.

“I am literally in tears watching Tiger Woods,” Serena wrote. “This is Greatness like no other. Knowing all you have been through physically to come back and do what you just did today? Wow Congrats a million times! I am so inspired thank you buddy.”

“A big ‘well done’ from me to Tiger Woods!” the 79-year-old Mr. Nicklaus tweeted. “I am so happy for him and for the game of golf. This is just fantastic!!!”

President Trump, who also tweeted a congratulatory message, said Monday he would award Tiger the Presidential Medal of Freedom.

Tiger previously won the Masters Tournament in 1997, 2000, 2001 and 2005. Sunday was the first time Tiger won a major when trailing going into the final round.

Just after Tiger sunk his final and winning putt at the tournament, Nike ran a television commercial featuring a video clip of Tiger as a 3-year-old saying that he was going to beat Mr. Nicklaus when he grew up. The commercial ended with the Nike slogan, “Just do it.”

Nike has sponsored Tiger since 1996, and stuck with him when several other sponsors and advertisers cut ties after his 2009 sex scandal and DUI arrest. On Monday, the sporting goods company’s stock jumped $2 billion in value.

Tiger came back to beat Francesco Molinari, the 54-hole leader who still was up two shots heading into the heart of Amen Corner. But Mr. Molinari’s tee shot on the par-3 12th hole never had a chance, hitting the bank and tumbling into Rae’s Creek for double bogey. Until then, Mr. Molinari had never trailed in a round that began early in threesomes to finish ahead of storms.

With the final group still in the 15th fairway, there was a five-way tie for the lead. And that’s when Tiger seized control, again with plenty of help. Mr. Molinari’s third shot clipped a tree and plopped straight down in the water for another double bogey. Tiger hit onto the green, setting up a two-putt birdie for his first lead of the final round. The knockout punch was a tee shot into the 16th that rode the slope just by the cup and settled 2 feet away for birdie and a two-shot lead with two holes to play.

Tiger finished at 13-under 275 and became, at 43, the oldest Masters champion since Nicklaus won his sixth green jacket at 46 in 1986.