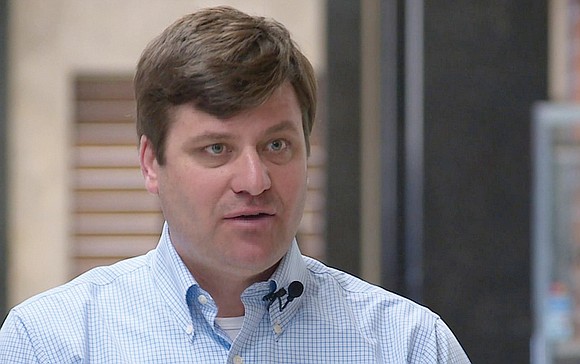 Last-ditch efforts to remove Parker C. Agelasto from Richmond City Council appear to be failing — virtually ensuring the 5th District representative will be able to serve out the final two years of his term despite moving his family to a home in the 1st District.

According to the petition, Mr. Richardson, who lives in the 5th District, wants the court to order Mr. Agelasto’s removal from office because he now lives in the 4200 block of West Franklin Street in the 1st District.

Mr. Richardson filed the petition as most of City Council abandoned any further involvement in the issue. The city Democratic Committee also has declined to intervene and Richmond representatives to the General Assembly have not submitted any legislation to address the situation.

Councilwoman Ellen F. Robertson, 6th District, who told the Free Press three weeks ago that she planned to take the matter to the state, is not responding to questions about her efforts.

Mr. Troy noted that Mr. Richardson, who is acting as his own attorney, cannot get a hearing in court because he has not served a copy of the petition on Mr. Agelasto; named parties must be served for a case to move forward.

That statute, Mr. Troy said, requires a petition “to be accompanied by a certain number of signatures of registered voters.”

According to the law, the number required is 10 percent of the total of those who voted in the most recent election for the seat. According to official 2016 election results, 11,071 ballots were cast in the three-way race that Mr. Agelasto won, meaning the petition would need 1,107 signatures.

Mr. Richardson is aware of the requirement since he was the subject of such a removal attempt in 1994 when a group of his constituents went to Richmond Circuit Court in a bid to remove him following his re-election. The petition, which was filed with sufficient signatures, was denied by the court, and Mr. Richardson stayed in office until September 1995, when he resigned after being arrested on drug charges.

Mr. Troy said the third problem is that Mr. Richardson’s complaint involves Mr. Agelasto’s residency. According to Mr. Troy, the state law, 24.2-233, is a way for constituents to ask a court to remove someone who has committed a crime, failed to do the job or made egregious mistakes.

Mr. Troy said he is prepared to argue that a question of residency does not fit into any of the categories of “malfeasance, nonfeasance and misfeasance” that the statute addresses.