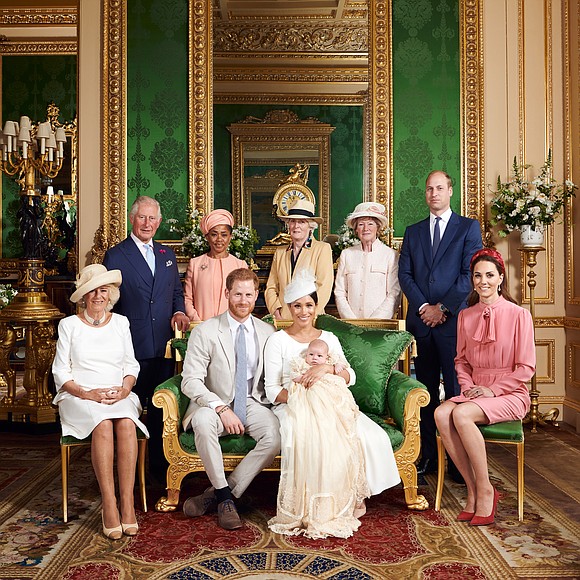 Archie Harrison Mountbatten-Windsor, the 2-month-old son of Britain’s Prince Harry and his wife Meghan, was christened last Saturday in a small, private ceremony at Windsor Castle.

The ceremony was conducted by the Archbishop of Canterbury Justin Welby in the castle’s Private Chapel, Buckingham Palace announced.

Queen Elizabeth II did not attend because of a prior engagement, BBC News reported.

In accordance with royal tradition, the Lily Font and water from the River Jordan were used during the christening. Archie, who was born on May 6, wore a handmade replica of the royal christening robe that has been used for the last 11 years, including the christenings of Prince George, Princess Charlotte and Prince Louis.

The original Royal Christening Robe was used for generations of royal babies before that, dating back to 1841, when it was commissioned by Queen Victoria.

“The Duke and Duchess of Sussex are overjoyed to share the happiness of this day, and would like to thank everyone around the world for their ongoing support,” a royal communications spokesperson told BBC News. “They feel so fortunate to have enjoyed this special moment with family and Archie’s godparents.”

Buckingham Palace has not said who Archie’s godparents are.

On their official Instagram page, Prince Harry and Meghan shared two official photographs of the occasion taken in the Green Drawing Room and the Rose Garden at Windsor Castle.

A second black and white photograph showed Archie in his parents’ arms in the Rose Garden.

Several newspapers have carried reports criticizing Prince Harry and Meghan for accepting public funds for their wedding and for renovations for their new house but denying the public a view of the baby and his parents arriving at the christening ceremony.

Prince William and Kate organized media facilities for the christenings of their three children, in which arrivals at the church were filmed.

Royal fans gathered near Windsor castle on Saturday, some with banners and flags, despite the well-publicized, private nature of the occasion.

Baby Archie is seventh in line to the British throne.

“I think it’s very hurtful to the fans, very, very hurtful,” said Anne Taley, 63, from Cardiff. “We’ve had the fingers, we’ve had the toes. When are we ever going to see the baby?” she added referring to previous discreet pictures posted by the royal couple.

Cheryl Bolson, 53, from Southampton, said she accepted the christening was a private, family event but added, “It would be nice if they were to come out afterwards and just maybe show the public that the baby’s been christened.”

Prince Harry and Meghan Markle married in May 2018 at Windsor Castle, west of London.