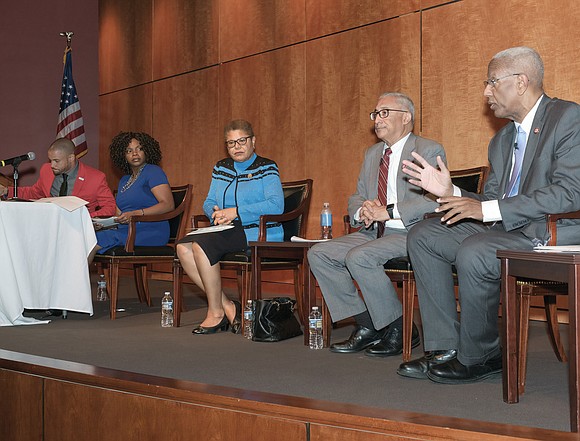 Call it better living through politicking.

Members of the Congressional Black Caucus emphasized the importance of political power as the key to positive change locally, statewide and nationally Saturday afternoon at the State of Black America Town Hall.

The town hall, which drew hundreds of people, was part of the Arthur Ashe Boulevard renaming celebration and hosted by 4th District Congressman A. Donald McEachin of Richmond.

As people flooded the exhibits in the Virginia Museum of History & Culture following the street dedication ceremony, the museum’s auditorium buzzed with questions that covered a wide breadth of the African-American experience and answers that frequently pointed to the ballot box.

“What you do in November 2019 will set the stage for 2020,” said Rep. McEachin in talking about the Nov. 5 contest in which all 140 seats of the Virginia General Assembly are up for election.

Responding to audience questions with him on the panel were 3rd District Congressman Robert C. “Bobby” Scott of Newport News and Rep. Karen R. Bass of California, chair of the Congressional Black Caucus. Rep. Steven Hosford of Nevada attended, but remained in the audience.

The panel discussed topics that ranged from mental health to education and criminal justice, and provided ideas and solutions that frequently trended toward matters of policy and motivating people to register and turn out at the ballot box.

At times, the nearly two-hour town hall felt like a Democratic campaign event for the November 2020 presidential race, with panel members pointing to the damage they said has been inflicted on the country and state by an unchecked and obstructive Republican Party. Depending on the actions of voters, the damage could stretch past the current “two and a half years of collective trauma,” as Rep. Bass described it, undoing decades of social, economic and cultural progress.

The need for action was most pronounced when a question was raised about the skepticism young African-American voters feel toward the Democratic Party. Rep. Scott answered by highlighting the results of the 2016 presidential election, the current conservative leaning of the U.S. Supreme Court and rising student loan debt as incentive enough for young voters to show up in greater numbers at the polling booths.

Sen. Bass underscored the need for candidates to connect with voters to ensure their understanding of the work being done by the Democratic Party, while Rep. McEachin said he was certain millenials would vote Democratic regardless.

“I think if we get them into the voting booth, they’re gonna vote blue. And we’ll then be able to show them how government should work,” Rep. McEachin said. “They can be as skeptical of the Democratic Party as they want to be. I just want them to vote.”

Not all of the topics were dominated by campaign concerns. The treatment of LGBTQ individuals in the African-American community as “others” led to a frank discussion of hatred and discrimination, violence against black transgender women and the lack of studies of the effects of HIV on the black community in comparison to those focused on gay white men.