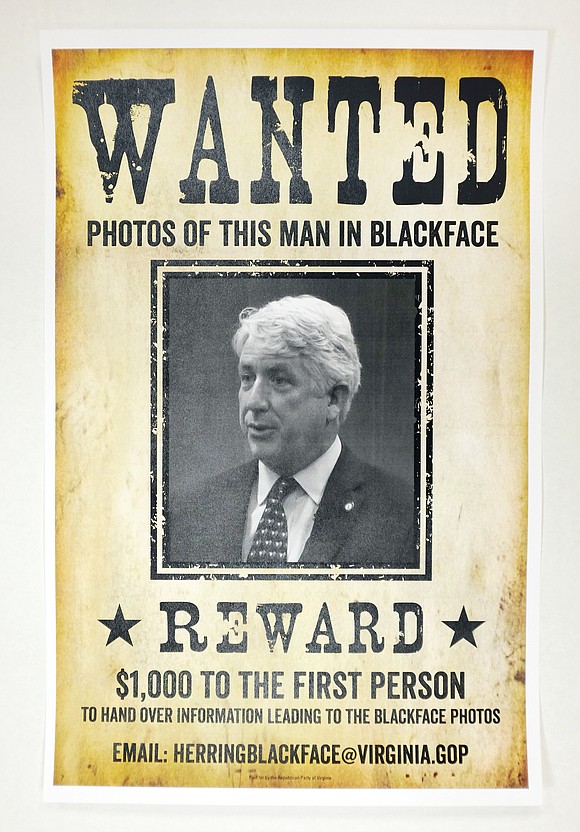 The Republican Party of Virginia is offering a $1,000 reward for photographic evidence of Virginia Attorney General Mark R. Herring in blackface.

GOP officials announced the offer Tuesday in a news release while also issuing large “wanted” posters with Mr. Herring’s name across the front.

The political stunt comes during a week in which Mr. Herring spoke publicly for the first time in nearly a month since he admitted to wearing blackface to attend a party as a 19-year-old freshman at the University of Virginia.

Speaking Monday on The Kojo Nnamdi Show on WAMU radio in Washington, the 57-year-old Mr. Herring apologized repeatedly for dressing up like rapper Kurtis Blow with a wig and blackface in 1980.

“It was a one-time occurrence, and it is something that has haunted me for decades, and I’m so very sorry for the hurt that I’ve caused,” Mr. Herring said.

In the radio interview, Mr. Herring defended his decision calling for the governor’s resignation, saying he only did so when it became clear that Gov. Northam had lost the public’s trust.

“For me, it was really about the public trust. And I want to be clear about this — I would hold myself to the same standard,” Mr. Herring said.

He also was questioned during the interview whether his admission to wearing blackface was prompted by media inquiries of a photo from that time. Mr. Herring told the radio host he came forward to “maintain my credibility.” He also said he is uncertain whether any photos exist.

“Does anyone really believe him?” GOP state officials said in a news release on Tuesday.

“Herring stated that he spoke with ‘college friends’ about his appearance in blackface and double checked if anyone had photo evidence of his indiscretions,” the news release stated. “…The Republican Party of Virginia is seeking further evidence of Mark Herring’s blackface and the witnesses to his racist past.”

The RPVA then stated they are offering a $1,000 reward for a “verified copy” of a photo showing Mr. Herring in blackface or verifiable contact information for one of his U.Va. fraternity brothers who could produce such a photo.

Gov. Northam initially apologized for being in a racist photo that surfaced on his 1984 medical school yearbook page showing one person in blackface and another in full Ku Klux Klan robe and hood. A day later, Gov. Northam said he wasn’t in the picture, but had worn blackface later that year portraying Michael Jackson during a dance competition when he was a medical resident in San Antonio.

Mr. Herring has kept an extremely low profile after issuing his initial statement.

During the radio interview, Mr. Herring did not directly respond to questions about whether he still thinks Gov. Northam should resign. The governor has resisted widespread calls to step down, instead saying he wants to focus on racial reconciliation during his remaining three years in office. Mr. Herring has said that is what he wants to do as well.

As for Lt. Gov. Fairfax, Mr. Herring said, “The women deserve to be heard, deserve to be treated with respect. All parties want some type of impartial investigation. The question is how that can happen. … I favor some path to have the facts come out.”

Before the blackface scandals erupted, Mr. Herring said he planned to run for governor in 2021. He said Monday that those plans are not on his mind at the moment.

“Obviously, I am not thinking about that at all. What I am focused on is what has happened in Virginia over the last month and what I might be able to do to repair the damage,” Mr. Herring said.