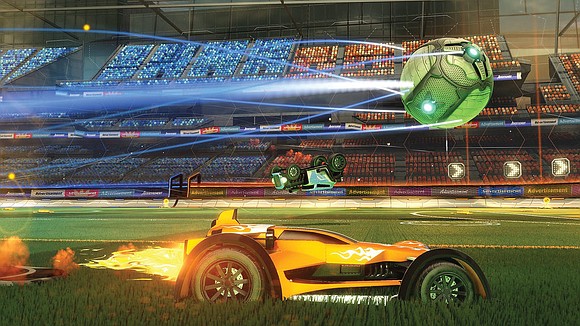 Rocket-powered cars are coming to the Richmond Raceway, but they’re not racing — they’re playing soccer.

Rocket League, a video game originally released on Windows and PlayStation 4 in 2015, pits teams of players against each other in a dome with the objective of hitting a giant ball into the opposing team’s goal with rocket-powered cars.

The Rocket League Gaming Tournament will take place noon to 5 p.m. April 13 in the Main Expo Hall of the Richmond Raceway. The winner will be crowned just before the waving of the green flag at the Toyota Owners 400 NASCAR race that night.

Other events also will take place during the tournament, such as an open-bracket competition where fans can register onsite to go head-to-head in matches, “Beat the Keeper” soccer challenges and battles in the Rocket League demo game stations.

The tournament is another way the raceway is involving fans.

“The Rocket League Tournament is yet another way we are growing Richmond Raceway eSports Fueled by Sunoco and exposing fans to an interactive, racing experience over the Toyota Spring Race Weekend,” Richmond Raceway President Dennis Bickmeier said.

With thousands expected to attend, the eSport tournament will be televised by Fox and live-streamed all day by Amazon’s international streaming network, Twitch.

ESports’ popularity does not seem to be slowing down.

The 2016 League of Legends Championship netted 43 million viewers, with 14.7 million watching at its peak. That number ballooned to more than 60 million viewers the following year.

The rise of eSports has even led to professional sports getting involved. In 2017, the NBA and video game company Take-Two Interactive founded the 2k league.

The league is centered around the NBA 2k basketball video game franchise. Teams are named after real NBA teams and operate in a manner that mirrors professional sports leagues. Teams draft people who will play the game for their team; players get salaries and benefits and can receive extra income from endorsements.