Harry and Meghan have a royal baby 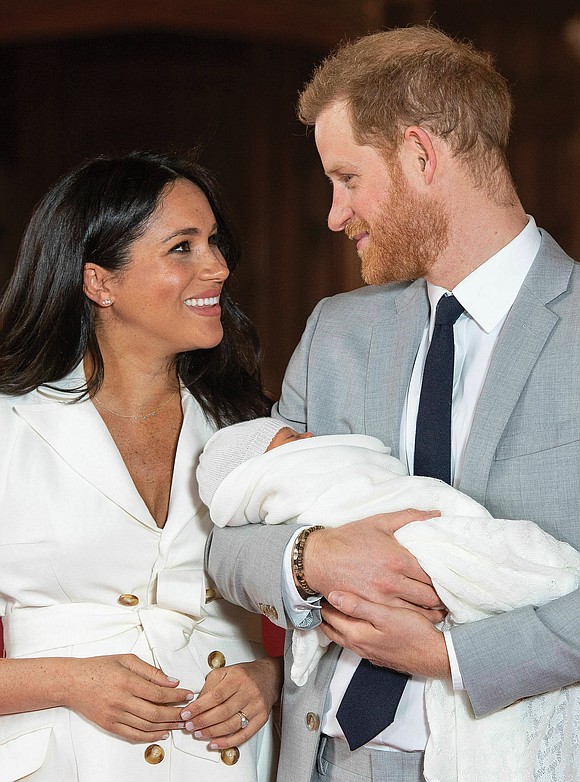 Prince Harry and Meghan Markle present their new son to the world on Wednesday during a brief photo session in St. George Hall at Windsor Castle, where their wedding reception was held last May. Master Archie was born at 5:26 a.m. Monday, weighing 7 pounds, 3 ounces. Dominic Lipinski/Pool via Associated Press

The baby could be entitled to hold joint British and American citizenship, according to nationality rules. However, the child will not automatically be a prince or a princess. Any such title would have to be bestowed by the queen by issuing what is known as a letter patent.

The queen and other members of the royal family, including the sister and brother of Prince Harry’s late mother, Princess Diana, were delighted by the news of the birth the palace stated.

Buckingham Palace did not confirm whether Ms. Markle gave birth at home. While the late Princess Diana gave birth to Prince Harry and his older brother, Prince William, in the hospital, the queen’s four children were all born at Buckingham Palace.

Ms. Markle’s father, Thomas Markle, a former lighting director for television soap operas and sitcoms in Los Angeles, said he was delighted at the news.

“I am proud that my new grandson is born into the British royal family and I am sure that he will grow up to serve the crown and the people of Britain with grace, dignity, and honor,” he said in a statement to the Sun newspaper.

Unlike Prince William and his wife, Kate, who posed for hordes of photographers outside a London hospital just hours after their three children were born, Prince Harry and Ms. Markle are expected to take part in only a limited photo op on the grounds of Windsor Castle in the next couple of days.

Prince Harry has held a special place in the hearts of many Britons since millions around the world watched him, at age 12, walk slowly behind his mother’s coffin as the funeral cortege made its way through the packed streets of London after Princess Diana’s death in a Paris car crash in 1997.

In his youth he found himself in the headlines for underage drinking, wearing a Nazi outfit to a costume party and scuffling with photographers outside London nightclubs.

But after a successful stint in the army, where he served two tours of duty in Afghanistan, his relaxed style and playful antics when on official engagements have seen him become one of the most popular members of the royal family.

“This tops the wedding,” said royal fan John Loughrey, 64, of London, who said he had been sleeping in Windsor for the last three days. “They’ve brought a royal baby into the world. We’re all excited.”

Prince Harry’s marriage to Ms. Markle, a divorcée hailing from Los Angeles who starred in the American television legal drama “Suits,” has only increased global interest, bringing in a new army of royal fans.

“For Anglo-American relationships, it’s going to be very important because suddenly there’s a child in the House of Windsor that is half-American,” said Ingrid Seward, editor of Majesty Magazine. “This is their entry into the royal family.”

African-Americans also are excited because of the baby’s biracial heritage. Queen

Elizabeth has acknowledged her African ancestry through Queen Charlotte of Mecklenburg, who served as queen of Great Britain and Ireland from her marriage in 1761 to King George III until her death in 1818.

The new baby will be brought up in the couple’s newly-refurbished home in Windsor, where they only recently moved. They have also set up their own office, breaking away from the joint operation they shared with Prince William and wife Kate.

Britain’s media has been rife with speculation about a rift between the brothers and their wives, although there has been no public indication of any disagreements. However, some British newspapers have reported that Prince Harry and Ms. Markle might move abroad, most likely to Africa, after the birth as they seek to forge their own royal role.