For the first time in 24 years, Democrats will hold the majority in the state Senate and House of Delegates 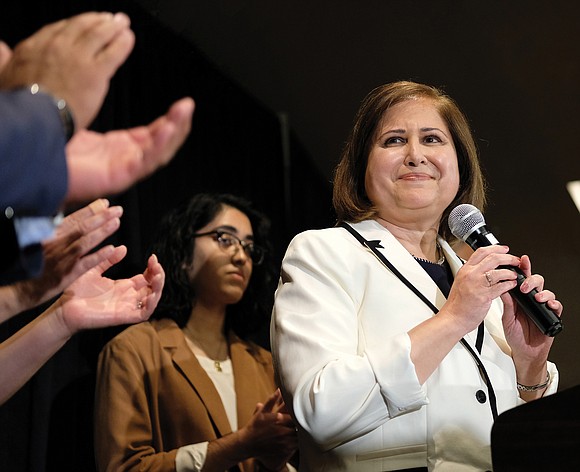 Ghazala F. Hashmi receives cheers and applause from supporters as she takes the stage to address the crowd at the Democrats’ victory party Tuesday night after her upset win in the Richmond area’s 10th Senate District. She is the first Muslim elected to the state Senate.

For the first time in 24 years, Virginia voters handed Democrats control of both houses of the General Assembly in Tuesday’s election.

With Democrat Ralph S. Northam holding the governorship, the party now holds all the levers of power.

That appears to virtually ensure passage in the 2020 General Assembly session of a raise in the state’s minimum wage — potentially to $15 an hour; approval of the Equal Rights Amendment for women; and agreement on other long-blocked Democratic priorities, such as restrictions on gun sales and potential bans on guns from public places.

Hundreds of people break into jubilant cheers Tuesday night with the announcement that Democrats will control the General Assembly in January. The celebrants were at the Democratic Party’s victory event held at a Downtown hotel.

Among the races that made the difference in the battle for control was the 10th Senate District, where educator Ghazala F. Hashmi gained a 3-1 margin in Richmond precincts to pull off the upset of first-term Republican state Sen. Glen H. Sturtevant.

Dr. Hashmi, who came to the United States from India as a child, saw her win as a victory for progressive-minded people and for immigrants who wonder whether they will be accepted and whether their names will be considered American.

She will be the first Muslim to serve in the Senate.

Meanwhile, in what many viewed as a clear rebuke to Presi- dent Trump and the GOP, voters in Northern Virginia swept out the last Republican delegate in that area, Delegate Timothy D. “Tim” Hugo, chair of the House Republican Caucus, replacing him with Democrat Dan I. Helmer.

While figures are not yet available, turnout appears to have been outsized in many areas for an off-year election. One example was the contest in the 68th House District, where 56.5 percent of registered voters turned out to enable incumbent Democrat Dawn M. Adams to pile up huge margins in Richmond and defeat African-American Republican Garrison R. Coward by more than 10 percentage points.

Though given little attention, the Virginia Legislative Black Caucus ranked among the big election winners Tuesday, particularly in House of Delegates races. Four of the candidates the VLBC backed won, with at least two claiming upsets.

Supporters celebrate the victory speeches given by Democratic candidates at the political party’s gathering Tuesday night at a Downtown hotel.

The difference was money, said Henrico Delegate Lamont Bagby, chairman of the VLBC, who joined 19 incumbent African- American legislators in the caucus in winning re-election.

“In 2015, we raised $40,000. This time, we raised $400,000 and were able to fully fund our candidates,” Delegate Bagby said. “We’ve come a long way.” The results show that the VLBC, which had 21 members last session, will increase to a record 23 members even after losing an African-American member in the Senate, Delegate Bagby noted.